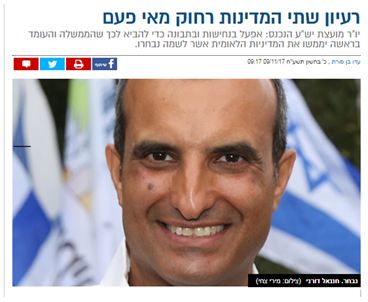 The new head of the West Bank Settlements Council: There is no place in Israel for two states

Settlement in the territory of the State of Palestine ends the idea of a two-state solution and this is what the officials of the illegal settlement in Palestine seek to.

“The right of the State of Israel is based primarily on the biblical and historical right,” wrote Hananiel Durrani, the new head of the West Bank settlement council, in his message to the Israelis.

“We, the citizens of Judea, Samaria and the Jordan Valley, know that the hope for peace is not through concessions and the establishment of a terrorist state (God forbid) in Judea and Samaria.” There is no place in Israel for two contradictory nationalities, it is wrong to think that another round of negotiations will lead to peace,” he said in the context of the political vision that he believes in.

Durrani continued: “We have been fortunate to build many settlements and have reached great achievements. Today, about half a million settlers live in Judea and Samaria. The idea of two states (and those who insist on it) is far from reality.