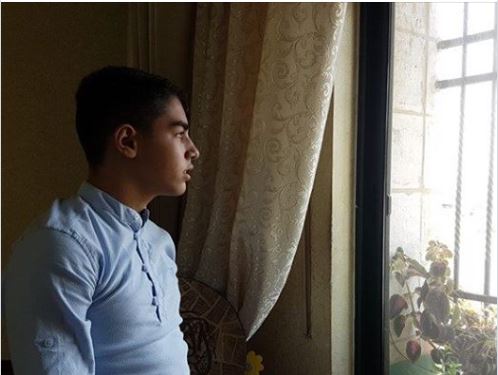 Israeli violations against Palestinian children are continuous. The story of the Jerusalem child Awad Rajabi is one of them.

Sitting beside his grandfather’s house’ window, the child Awad Rajabi is watching his student partners going to school crying their bags, enjoying the new academic year. He is watching their steps hoping he is accompanying them. But Israeli occupation deprived him from doing so, after Israeli authorities imposed home confinement against him.

The child Rajabi was arrested by Israeli occupation police in 11 July 2018, where he was poisoned for a month and a half, but the judge decided to release him provided that he implements domestic confinement, as well as deporting him from his own twon, Siwlan, to Wadi al-Jouze area.

The child said “I missed my school, I woke up and saw my school partners through window, I wished I was among them. I was deprived of these wonderful days. How can I buy new clothes and a bags!”

It is worth mentioning that Rajabi was interrogated and questioned using physical beatings and psychological torture, on the purpose of extracting a confession from that he threw Molotov cocktails in the town of Silwan.