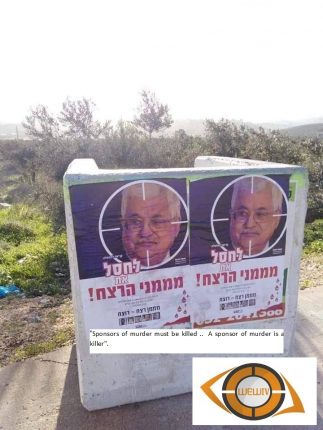 Terrorist settler gangs disseminated Monday afternoon 10-12-2018 inflammatory posters at Huara checkpoint, east of Nablus, showing pictures of president Abbas, with a sniper pointing his rifle to the head of the president, saying “In order to assassin sponsors of murder .. sponsor of murder is a killer”.

These inflammatory posters was accompanied with another inflammatory report by the Israeli Channel 10 TV, which said yesterday “Abu Mazin is inciting violence, and he  is in charge of Fatah movement which congratulates attacks against Israelis”.