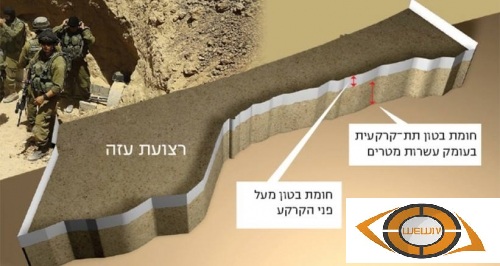 In personification to the mentality of Gheto lived by leaders of the state of occupation, Israel embarked on 3-2-2019 establishing a wall “the upper barrier” extending along the Gaza Strip border.

Israeli occupation army published initial pictures for the wall, which seemed to be 8-meter-height fences and barbed wires, to be established by Israel along 56 kilo meters along the borders.

Eren Over, leader of borders in the ministry of Israeli army, said “that the ministry and the army are going to build the first stage of the “upper barrier” above the “land barrier” wall.

Israel had established after al-Aqsa Intifada 2002 a cement wall separating the West Bank from the Occupied Jerusalem and Lands of 48. It also has built walls similar to the wall being established around Gaza, at the borders of Egypt, Jordan, Lebanon and the occupied Golan Heights.