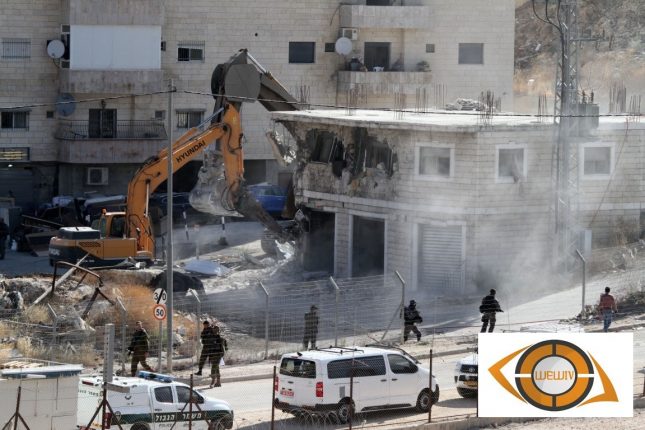 Video – The occupation  demolished Wadi Al-Homs area  homes and  and prevented its people from praying on the rubble.

Another violation by the occupation authorities against the Palestinians in occupied Jerusalem, where it repeated  its oppressive  policy, by  preventing  even a peaceful protest against the demolition of  homes after the Friday prayers on 2-8-2019 on the lands of Wadi al-Homs in the town of Sur Bahir in occupied Jerusalem. in protest against the demolition of 11  homes  and the threats to demolish more claiming that these homes  threaten the security of the “security road”,  that was located on the Palestinian lands. The Israeli army raided the sit-in tent for Friday prayers  near the destroyed Abu Hadwan family building. and  fired gas bombs and rubber bullets  directly at Palestinian worshipers.

On Monday, 22-7-2019, the Israeli occupation army demolished 100 apartments in the Wadi Homs neighborhood after they declared the  town a closed military zone.