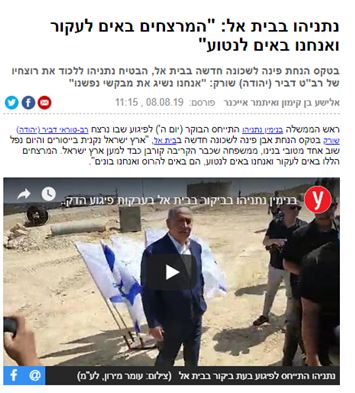 Yediot Aharonot reported  that Prime Minister Benjamin Netanyahu has laid the foundation stone for the construction of a new  Neighborhood in Beit El settlement  located on Palestinian land near Ramallah in the West Bank on Thursday 8/8/2019.

Netanyahu said during the establishment of the settlement: “Our goal is to reinforce the presence of the Jewish people in their country and ensure our sovereignty in our historic homeland

Netanyahu stressed that the Israeli government will continue to expand the settlement project, and vowed to arrest the perpetrators of  the process, saying: “We will reach out to those who seek to eliminate us, as we will work to reinforce our roots in our entire country

Shai Alon, the head of what is called ” the Beit El Regional Settlement Council” also the Minister of Immigration and Absorption of  the Israeli government, Yoav Galant, participated in the establishment of the new settlement which is part of Galant plan to expand Beit El settlement and the  reinforcement of the settlement project  in the area of what is called Benjamin “.