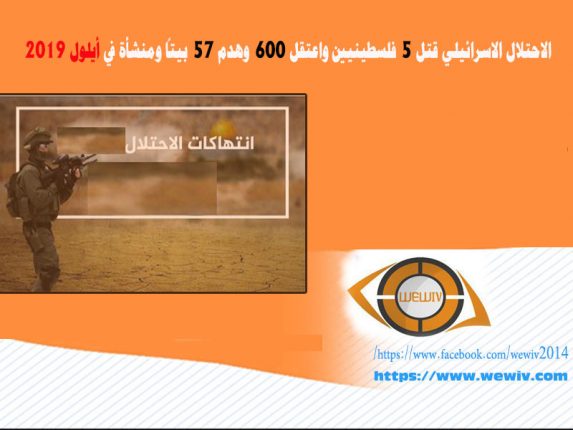 The Israeli Occupation Forces killed five Palestinian citizens, arrested 600 others, and demolished 57 houses and facilities in last September, according to Abdullah al-Hourani Centre for Studies and Documentation of the PLO’s labor and planning department.

The Israeli authorities have continued to detain the bodies of 49 martyrs in their refrigerators, since October 2015, in flagrant violation of international humanitarian law.

140 prisoners have been on hunger strike for about a month, refusing to put carcinogenic jamming devices inside the Israeli prisons.

In addition, about 600 Palestinians were injured in the West Bank, Gaza Strip and Jerusalem, (439) citizens were shot by the Israeli occupation in the Gaza Strip, the demolitions were concentrated in the governorates of Hebron, Jerusalem, Tubas, Bethlehem, Salfit, Nablus and the Jordan Valley.

The Israeli occupation forces also demolished 57 houses and facilities in the West Bank and Jerusalem, included 22 houses and 35 facilities, including the demolition of a mosque in Jabal Jawhar area, south of Hebron, in addition to Self- demolition of a house and a facility in the town of Silwan south of Al-Aqsa Mosque. In order to avoid paying heavy fines, the owners demolished them by themselves. in the governorates of Hebron, Jerusalem, Tubas, Bethlehem, Salfit, Nablus and the Jordan Valley.

In the same period, the Israeli occupation forces seized (1500) dunums of Palestinian land in Al-Hijra area of Dura, south of Hebron. They also seized about 100 dunums of Palestinian land in the villages of Jaloud, Qaryut, south of Nablus, and Turmus’aya, northeast of Ramallah, for the settlement expansion in Shilo settlement on the lands of these villages. They also seized 85 dunums of the lands of Shu’fat town.