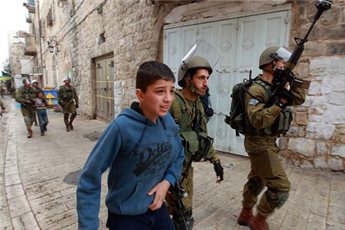 On the eve of Palestinian Child Day , which is on the fifth of April of each year, the Israeli occupation authorities continue to arrest about 200 children and minors in the “Ofer,” “Megiddo,” and “Damoon” detention camps, that lack the minimum human needs, and where they subjected to  torture and insult , in contrary to the international human rights laws.

Since 2000, the Israeli Occupation Army has arrested at least 17,000 Palestinian minors, aged between 12-18, and many cases of arrest and detention of children less than  ten years old were recorded, about three quarters of  them subjected to some form of physical torture, while all of them were subjected to Psychological torture during the different  stages of detention