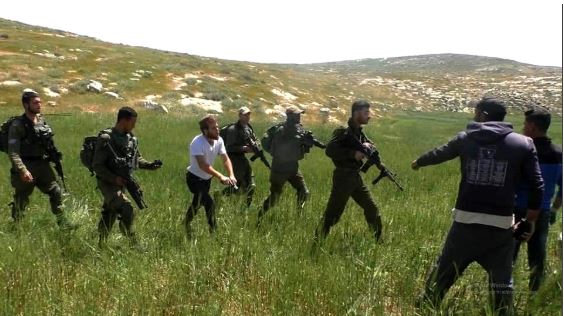 A sharp increase in settler violence during April

These attacks include severe physical assaults, during which settlers used batons, axes, electroshock weapons, stones, and dogs, and sometimes part of the attackers was carrying firearms. Additionally, property damage, including attacking homes, destroying and burning cars, destroying and uprooting trees and other crops, and stealing livestock.

A particularly serious incident took place on 16 April, when brothers ‘Issa and Musa Qatash from al-Jalazun Refugee Camp were attacked by settlers while out for a walk in their family plots near the village of Jibya. The brothers were beaten so severely that they required medical attention. The assault on ‘Issa Qatash was prolonged and resulted in a fractured bone in his leg and two broken front teeth.

The state’s full support for this violence is evident in the actions of Israeli security forces on the ground. Five of eight attacks on Palestinian homes in March occurred in the presence of soldiers, who allowed the settlers to do as they pleased. In three incidents, the soldiers arrived with the marauding settlers or joined them early on in the assault.

For years, Israel has allowed settlers to attack Palestinians and damage their property virtually unimpeded, as a matter of policy. This includes provision of military protection for the attackers, and in some cases soldiers’ active participation in the assault.