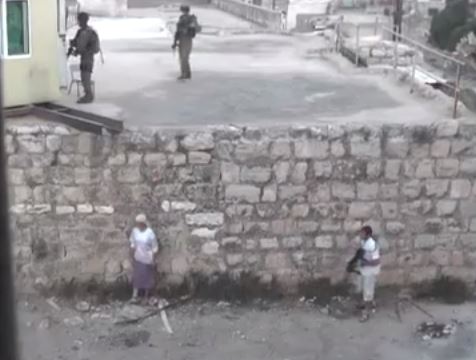 Third Video: The soldiers detained Mahmoud Abu Hayah, a B’Tselem camera volunteer who also recorded the incident. They kept him there for two hours after the incident, but did not take him to the police station.

Some nine months ago, on 10 November 2013, the same B’Tselem camera volunteer filmed soldiers standing by at the very same spot while a settler threw stones:

Each of the three segments indicates that the soldiers disregarded their duty to protect the Palestinians in the area during these incidents: they took no steps to stop the settlers’ violent actions, while taking measures only against violent actions by Palestinians. Moreover, it appears that the soldiers made no attempt to identify masked settlers or detain any settlers at all and hold them until the police could arrive to ensure proper law enforcement.

The reality created by Israel’s occupation of Hebron gives rise to frequent skirmishes between settlers and Palestinians in the city. The military is duty-bound to take action to enforce the law on both parties. Refraining from action against violent settlers conveys a message that settlers may attack Palestinians and their property and get military protection to do so.