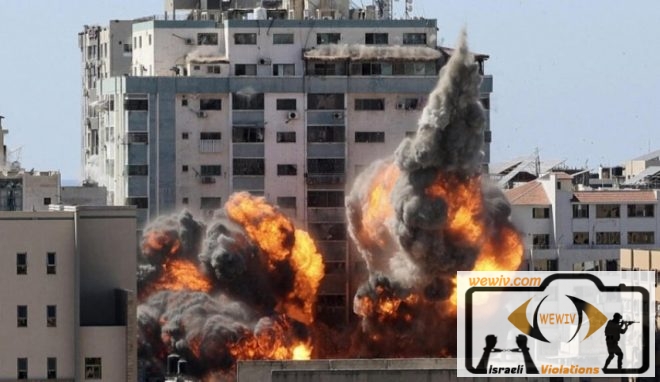 On Saturday 5/15-2021, an Israeli air strike destroyed with four rockets Al-Jalaa Tower which consists of 12 floors, and leis on Al-Jalaa Street in Al-Rimal neighborhood in Gaza, which houses international and local media institutions and companies.

For his part, the President of Associated Press expressed his shock at bombing AlJalaa tower, which includes the agency’s office and other international and local media institutions and companies in Gaza, considering that what happened means that the world will hear less news of what is happening in Gaza.

The executive chief of Associated Press, Gary Pruitt, said he was “shocked” by the Israeli army’s targeting of Al-Jalaa tower in central Gaza.

“We are shocked and terrified that the Israeli army targeted and destroyed the building that houses Associated Press office and other news organizations in Gaza,” Pruitt said in a statement.

“They have known the location of our office for a long time and they knew that the journalists were there.

“The world will not know much about what is happening in Gaza because of what happened today,” he concluded, referring to bombing and destroying Al-Jalaa tower in Gaza City.