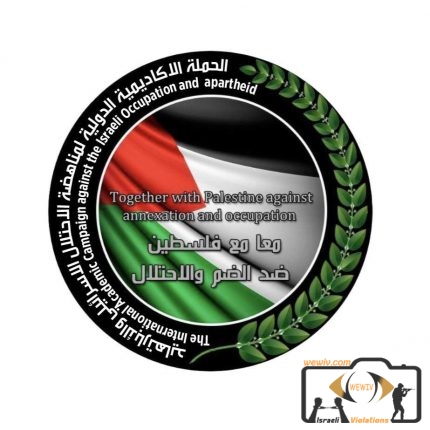 The International University Campaign Against Israeli Occupation and Apartheid.
Mid-year report 2022.
A Look at Israeli Apartheid.

The first half of this year 2022 is marked by numerous violations and crimes against the Palestinian people, especially in the issues of discrimination and apartheid. Preliminary reports from this period indicate that the Israeli occupation government is engaged in the application of the apartheid regime and oppression against the Palestinian people. According to the report, this period is characterized by two main features: the anti-Palestine and the struggle against all that is Palestinian at the level of identity, ethnicity, ideological affiliations. The second characteristic is Zionism-ISISism (Daesh), where the practice of the Zionist movement against the Palestinian people has evolved to contain practices of violence, extremism and apartheid. According to the report, these crimes include fifteen violations as follows:

First: the expansion of the colony.
The colonial “Supreme Planning Council” has approved the construction of 4,427 colonial units in the occupied West Bank, including the approval of the construction of a settlement park between Jerusalem and the Dead Sea in an area of ​​nearly one million dunums, which if implemented would destroy the two-state solution, as it would lead to the division of the West Bank into two unconnected parts.

Second: The crimes of persecution of the Palestinian people and denial of their fundamental rights in various fields.
The most important of these crimes are:
1- The escalation of the policy of arrests, including administrative detention.
According to the Palestinian Prisoner’s Club report, Israeli authorities have issued more than 550 administrative detention orders against Palestinian prisoners since the beginning of 2022. The Israeli occupation army has also arrested more than 1,100 Palestinians across the West Bank, since the beginning of this year. , including nearly 300 Palestinians who have been arrested over the past month, according to the Hebrew website “Walla”, the occupation forces have arrested around 2,200 Palestinians over the past year as a whole. According to Israeli security sources, the increase in the number of Palestinian detainees is due to the increase in the number of forces mobilized by the occupation in the West Bank, where 24 military battalions are currently operating in the West Bank.
2- Violations of human rights.
The report of the Commission for Settlement and Resistance to the Wall found a total of 6,107 violations against the Palestinian people, their properties and agricultural lands, including the uprooting of trees and attacks on farmers and residents by Israeli occupying forces and herds of settlers.
3- Murder and physical targeting.
According to data released by the Palestinian Ministry of Health, until the beginning of May, 57 Palestinians have been martyred in the occupied West Bank and Jerusalem by bullets and attacks by the Israeli occupation forces since the beginning of this year. 2022, and data collected by the Israeli organization B’Tselem indicated that around 947 Palestinians were injured by Israeli forces in the first half of this year. The Euro-Mediterranean report indicates that the occupation authorities killed five times more people in 2022 than they did in the same period of 2021. The Commission for the Resistance of the Wall and Colonization indicated in its monthly report that the settlers had carried out 133 attacks, including taking part in the storming of the area of ​​Joseph’s Tomb in the city of Nablus, in addition to assaulting children, spraying them with gas or forcing them to take off their clothes.
4- Military checkpoints.
According to a study prepared by the Applied Research Institute ARIJ, Palestinians lose around 60 million working hours per year due to Israeli military checkpoints in the West Bank, which cost around $270 million per year, in addition to consume an additional 80 million liters of fuel per year, at an estimated cost of $135 million. Its consumption leads to an increase in carbon dioxide emissions of approximately 196,000 tonnes per year.

Third: Forced displacement
According to the decision of the so-called “Israeli High Court of Justice”, which ruled that Israel can evict approximately one thousand two hundred Palestinians from their homes in Masafer Yatta, south of Hebron, which are lands declared by the occupying army as a “military training area”. The move is considered the largest forced displacement of Palestinians after the 1948 war, and Palestinian citizens of these areas suffer explicit racial discrimination in relation to the level of well-being of Israeli settlers next to them. Occupation forces are also disrupting the ability of Palestinians there to access basic services such as water, education and health.

Fourth: Enforcing Israeli Laws at Ariel Settlement University.
The Committee of Presidents of Israeli Universities has decided, following the decision of the previous Israeli government, to recognize the University of the settlement of Ariel, which is located on the land of Palestinian citizens in the middle of the occupied West Bank near Salfit , and to include it in the committee, and this by circumventing international laws, in particular the four Geneva Conventions, which consider colonization as an illegal act.

Fifth: Not exposing those responsible for the violence against the Palestinians.
Attacks by Israeli settlers against Palestinians amount to around 200 attacks on average, and in most cases more than 85% of these attacks are recorded against strangers in the Israeli police, who incidentally do not care about find the authors. For example, two Israeli settlers recently fired on the Burj Al-Laqlaq association in the Old City of occupied Jerusalem, and despite the panic that prevailed among the children of the association, no military action by the occupation soldiers took place, and the perpetrators have not been revealed so far. In another case, Ali Hassan Harb (22) was stabbed to death by a settler near Ariel settlement while defending his land against settler attacks. According to witnesses present on the spot, the murder took place under the eyes of the occupation soldiers.

Sixth: Reduce penalties for settlers involved in acts of violence against Palestinians.
Israeli courts give reduced sentences to Israelis who attack Palestinians. For example, last June the Tel Aviv District Court sentenced a man to just 15 months in prison for his part in a racist attack on an Arab driver in the occupied territories during the period of violence between Jews and Arabs l ‘last year. Any indication of racial motives has been removed from his file. The sentence was light compared to the extent of the damage suffered by the Arab driver.

Seventh: The storming of Al-Aqsa Mosque.
Data from human rights and endowment institutions in the occupied city of Jerusalem indicate that approximately 4,500 settlers storm Al-Aqsa Mosque each month, an increase that is forced and that has doubled from the last year 2021. What distinguishes the incursions of extremist settlers this year is that they perform Talmudic prayers in the courtyards of Al-Aqsa Mosque under the guard of soldiers and occupation police. Data was provided by the Palestinian Information Center “Maaty” on occupation and settler violations against Al-Aqsa Mosque during the month of May; by committing 38 attacks on places of worship and holy sites, while 4,876 settlers stormed the Al-Aqsa Mosque, in addition to organizing the so-called “March of the Flags”, in which more than 50,000 settlers participated.

Eighth: Besiege villages and citizens.
Israeli forces besiege many Palestinian villages and towns, usually under false security pretenses. For example, according to the newspaper Al-Hayat Al-Jadida, the occupation has been going on for two weeks to impose a military siege on the ports of the village of Aboud, and the citizens are contesting this closure by using the secondary and bumpy roads. The continuous closure of the entrances to the village has negatively affected the lives of more than 2500 people living in this village, which has been plagued by the presence of several settlements, some of which are built on large parts of the village land. From another angle, the occupation forces block the roads of the inhabitants of the village of Ras Karkar, near Ramallah, and besiege it with seven iron gates and four settlements.

Ninth: Land piracy.
Israeli occupying forces and settlers continue to pirate Palestinian lands in many Palestinian villages and towns. Piracy is widespread in Masafer Yatta, in the old city of Hebron, and near the villages of Ramallah and Bethlehem and other areas of the occupied West Bank. News reports indicate that over the past thirty years, settler piracy has built hundreds of roads, with a total length of several hundred kilometers. These roads, although built illegally on private and public Palestinian land, were over time legalized by the Israeli authorities and allowed to be completed. As an example of these acts of piracy, last June Israeli settlers built a “piracy road” in Al-Bireh lands connecting the settlement of Beit El and the settlement of Ofra.

Tenth: Demolition of houses and facilities.
The occupation authorities continued their policy of confiscation of Palestinian lands and notified the demolition of numerous installations. According to a report by the Al-Quds Center, last May around 42 facilities were demolished, including the houses of prisoners and martyrs, as part of the occupation’s policies of collective punishment, as well as the demolished village of Al-Araqib in the Negev, while other facilities have been notified of demolition in various governorates of the country. Human rights reports indicate that the number of facilities and houses that have been demolished or targeted for demolition has increased to (238) facilities that were targeted by “Israel” only in February with the demolition and distributing notices.

Eleven: Attacks on Journalists.
An Arab human rights committee reported that Israel committed 148 media freedom violations in the occupied Palestinian territories during the month of May. In this context, the occupying forces assassinated on May 11 the journalist Shireen Abu Aqleh, who had rebelled during her media coverage of the storming by the occupying army of the Jenin region in the West Bank.