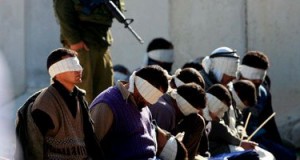 Jenin – The Israeli forces stormed Araqa village and arrested the citizen: Mahmoud Tawfiq Yahya, 21 years, after raiding his family’s home and searching it.

Hebron – The occupation forces stormed Beit Ummar town and arrested the citizen: Waheid Hassan Sabarneh, 23 years, and searched several houses in the town. They also stormed Al-A’rroub camp and Hebron city and arrested the two citizens: Faris At-Titi and Ahmed Qawasmi after searching their homes and tampering with their contents.

Hebron- The occupation forces stormed Yatta town and searched the house of the citizen Ra’afat Mahir Al-U’drah, and arrested his brother Mohammed 22 years.

Hebron- The Israeli police arrested the citizen Zuhdi Abed Ar-Rahman Mahfouz, 55 years, from Al-A’rroub camp, while he was within the territory in 1948, and took him to the hospital for a cardiac stroke during his arrest.