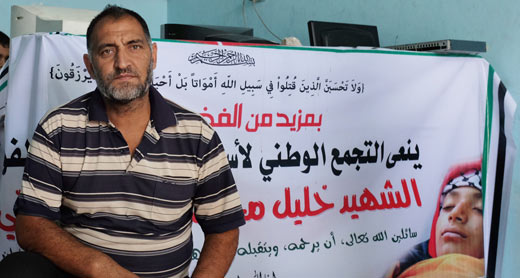 On the morning of 10 August 2014, a soldier shot 10-year-old Palestinian boy Khalil ‘Anati in al-Fawwar Refugee Camp in the West Bank. The boy was rushed in his uncle’s car to hospital, where he was pronounced dead.

One of the military vehicles had parked facing the center of the camp and turned around close to one of the alleys from which the stones had been thrown. On its way out of the camp, the vehicle stopped next to another alley, from which stones had apparently been thrown, too. The driver opened the door, fired a single shot, and resumed driving. About half a minute later, the second vehicle drove by the same alley without stopping. The single shot, which was preceded by no warning or use of non-lethal measures, killed 10-year-old ‘Anati. Medical records obtained by B’Tselem show that he was struck by a live bullet that entered his lower back and exited through his thigh.

B’Tselem spoke with Tha’er ‘Anati, who lives on a hill overlooking the main road and described what he saw:

Looking out from my house, I saw four or five boys throwing stones at an army jeep that was parked on the main road, at the entrance to the route that leads to the water facility. The boys were throwing the stones from an alley off the main road, where the jeep was parked. I went up onto the roof to see what was going on. The boys continued throwing stones. At first, for about ten minutes, the soldiers didn’t respond.

I saw the white jeep drive out of the camp. Then, the army jeep that was parked facing the center of the camp started driving. It moved about 20 meters and reached the entrance to the alley where the boys were. There, it turned around and drove slowly along the road, until it stopped at the entrance to another alley. I saw the driver open the door and immediately heard a gunshot. Later, I heard that Khalil ‘Anati had been hit by that shot and died.

Fares al-‘Ajarmeh, who lives by the alley where ‘Anati was shot, told B’Tselem what he saw:

I heard voices outside my house. I thought it had to do with the army being in the camp. I opened the window that looks out onto the alley and saw a 10-year-old boy that I know, Khalil ‘Anati, running through the alley. I think he entered it from the main road. I also saw an army jeep standing in the main road, right opposite the alley.

The driver opened the door and fired one bullet from his rifle. I heard the shot and then the boy shouted: “They shot me, the sons of bitches shot me”. He ran a few meters and fell down at my door. The army jeep stopped for a few seconds and drove off east. I saw the boy, who was wounded, trying to crawl to the end of the alley. A laborer, who was working in the area I guess, picked him up and ran to the end of the street with him.

An IDF Spokesperson announcement from the day of the incident stated that “during the course of operational activity in al-Fawwar, a violent riot developed during which an IDF force opened fire, from which a Palestinian minor was killed. The IDF regrets his death. Also, the IDF will investigate the details of the incident and a Military Police Investigations Unit (MPIU) investigation will be opened into the matter”. Later, the IDF Spokesperson provided a slightly different response for an article published by Israeli daily Haaretz, stating that activity was not an operation but rather “routine activity by IDF forces, which were providing security for work being carried out by the water authority in the vicinity of Al-Fawar”.

Muhammad ‘Anati, brother of eyewitness Tha’er ‘Anati, filmed part of the incident on video from his house on the hill. Although the footage was shot from far away, it provides crucial details:

The video footage and B’Tselem’s investigation indicate that four or five boys and youths were throwing stones from alleys. It is not clear whether stones were thrown at the army vehicle when it stopped at the entrance to the alley where ‘Anati was shot. However, it is clear that the soldiers were not in mortal danger and therefore were not permitted to use live fire. It is doubtful that the circumstances even merited the use of less injurious means. The shooting that killed ‘Anati was certainly unjustified. Use of live fire in such a context is unlawful, and the circumstances raise the suspicion the soldier aimed directly at the boy.

B’Tselem sent the MPIU all the information it gathered concerning the incident. However, the MAG Corps and the MPIU cannot make do with investigating the soldier who fired the lethal shot: they must investigate the orders given to the soldiers before they entered the camp. The law enforcement authorities must speedily conclude the investigation, publish its findings and bring those responsible for the killing of 10-year-old Khalil ‘Anati to justice.