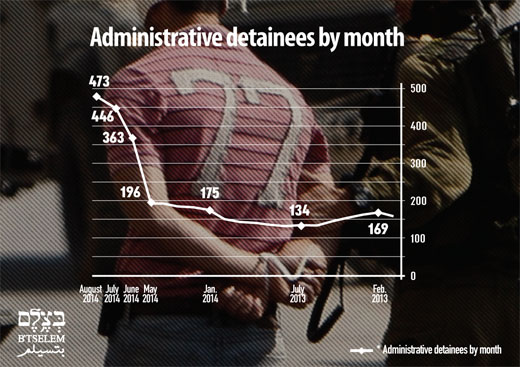 According to Israel Prison Service (IPS) data, more than 60 percent of administrative detainees held at the end of August 2014 had been held for three months or less. Some 10 percent had been held for three to six months, some 13 percent from six months to one year, and some 13 percent from one to two years. Four detainees had been in administrative detention continuously for over two years.

Administrative detention is detention without trial, ostensibly intended to prevent people from committing acts that are liable to endanger public safety, rather than punishing them for offenses already committed, as is the case in criminal proceedings. As detention on the basis of potential conduct rather than past actions is problematic, international law permits its use only in the most exigent circumstances.

Although detainees are brought before a judge to approve the detention order, the judicial review is merely a semblance of a just legal system: most of the material submitted by the prosecution is classified and not disclosed to the detainees or their counsel . Since the detainees do not know evidence there is against them, they are unable to refute it. Given the inherently inferior position of detainees in such proceedings, military judges and High Court justices presiding over these cases have a duty to serve as “temporary defense counsel” for the detainees, but they often shirk this responsibility and almost always accept the position of the security establishment.

Relying on the secrecy of the process, and with court approval , the security establishment illegally exploits administrative detention to incarcerate people for offenses allegedly committed in the past so as not to expose evidence against them.

Some 70 percent of the administrative detainees held at the end of August 2014 were held in facilities located inside Israel – a violation of international law, which entails further violation of their rights, including denying some of them the right to visits, as the security establishment refuses to issue relatives permits to enter Israel.

The government of Israel must release all administrative detainees or prosecute them, in accordance with due process.