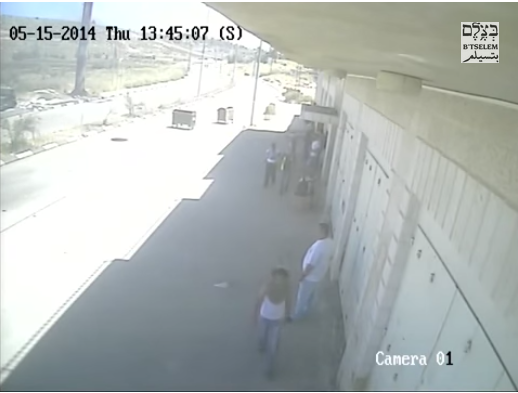 Following yesterday’s arrest of several Border Police officers over the killing two Palestinian youths at Bitunya in May 2014, B’Tselem said that the official investigation’s findings corroborated what the organization found immediately after the incident – that Nadim Nawarah and Muhammad Salameh (Abu Daher) were killed, and two other Palestinians injured, by live ammunition and not rubber-coated metal bullets. The officer who remained in custody is only a suspect at this point, and no charges have been filed against him. However, the findings that led to the arrest appear to confirm B’Tselem’s report and refute the military’s version. The latter relied on accounts given by soldiers in an operational inquiry and was broadly quoted by the media.

The investigation must be speedily completed and the persons responsible for the killing of the two youths stand trial. This incident is exceptional in the rare body of evidence available: full footage of the incident captured by security cameras, a bullet recovered from Nawara’s backpack, and metallic fragments extracted from Nawarah’s body during an autopsy. B’Tselem does not know whether the officers arrested are also suspected of having killed Salameh (Abu Daher) and injuring two other youths, and whether anyone will be held accountable for those cases.

In the days after the Bitunya shooting, Israeli politicians, army officers, pundits, military spokespersons and others self-appointed government apologists claimed that the footage was fabricated, some even suggesting that the deaths themselves had been staged. This false rhetoric served a well-orchestrated spin intended to divert attention from the gravity of the incident and the need for investigation to the credibility of the video footage. In future, the authorities would do well to concentrate on uncovering the truth rather than creating media spins and attempts to evade responsibility for wrongdoing.

Background on the incident:

On Thursday, 15 May 2014, four Palestinians were shot with live ammunition in the West Bank town of Bitunya, close to Ofer Prison, during a demonstration marking Nakba Day. Two of them, both minors, died of their wounds: Nadim Siyam Nawarah, 17, from Ramallah, and Muhammad Mahmoud Salameh (Abu Daher), 17, from the village of al-Mazra’ah al-Qibliyah. Muhammad ‘Azzah, 15, also a minor, was hospitalized in the Intensive Care Unit in Ramallah, where he is recovering from his wounds. The fourth victim, a 23-year-old who wished to remain unnamed, was lightly injured. All four were injured in the upper torso: Nawarah and ‘Azzah were struck in the chest, Salameh was struck in the back, and the fourth man was struck below his left elbow.

In response, the IDF Spokesperson stated that army forces operating in the area that day had used only crowd control means, and not live ammunition. B’Tselem’s investigation refuted this version, finding strong evidence that live ammunition was used and that the fire hit the upper torsos of all four victims. The investigation, compounded by security camera footage of the incident, indicate that the circumstances of the incident in no way justified use of live fire. These findings raise grave suspicion that the killing was willful.

B’Tselem obtained medical opinions regarding the entry and exit wounds found in the bodies of all four victims, which are completely consistent with injuries caused by live fire and could not have been caused by rubber-coated metal bullets – especially not when fired at a relatively long range, as was the case here. Also, eyewitness accounts described the sound of live gunfire, which sounds different from rubber-coated bullet fire.

The army’s open-fire regulations clearly stipulate that live ammunition should not be used against stone-throwers, except in cases of immediate mortal danger. Security camera footage of the incident proves that at no stage were security forces endangered by any of the four victims, or by anyone close to them at the time of the shooting. The footage shows Nadim Nawarah being shot while walking along a street towards the area where Palestinian youngsters were clashing with army forces, and Muhammad Salameh with his back turned in the direction of the security forces that shot him.

B’Tselem has obtained the full video footage from all four security cameras installed on the building opposite which the minors were standing when shot. B’Tselem has transfered all the material at its disposal to the Military Police Investigations Unit, demanding an investigation not only into the soldiers’ conduct in the incident, but also into the responsibility of senior officers who were present at the scene for the killing of civilians by lethal force. B’Tselem also demanded an investigation into the military’s highly incorrect version of the incident conveyed to the media.