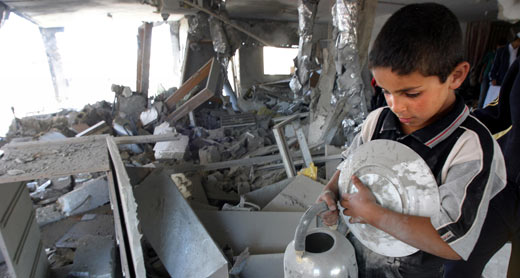 Israeli Prime Minister Binyamin Netanyahu has ordered the demolition or sealing of the homes of the families of the Palestinians who carried out recent attacks against Israelis. This action constitutes harming the innocent. It is collective punishment that is both unlawful and immoral.

The security establishment has announced its intention to demolish or seal six homes: three in East Jerusalem, one in Nablus and one in Hebron:

Apartment of Ibrahim ‘Akari’s wife and young children, on third floor of 3-story building, Shu’fat.
Apartment of Muhammad Ja’abis’s mother, on second floor of two-story building, Jabal al-Mukabber.
Apartment of Mu’taz Hejazi’s parents, on first floor of building in Abu Tor, where his parents, brother and sister live.
Apartment of Maher Hashlamon’s wife and young children, on fourth floor of 5-story building, Hebron.
Home of Nur a-Din Abu Hashiyah’s parents, in ‘Askar Refugee Camp near Nablus. His parents live there with five of their children, one of whom is a minor.
Third-floor apartment of ‘Abd a-Rahman a-Shaludi’s family, Silwan.
Since the occupation began in 1967, Israeli security forces have demolished hundreds of homes to punish relatives of Palestinians who harmed or allegedly harmed Israelis. This policy rendered homeless thousands of people who were not themselves accused of any wrongdoing.

About ten years ago, a military committee headed by Major General Udi Shani found punitive home demolitions to be a measure of questionable effectiveness in deterring attacks against Israelis. It found that there are even indications that demolitions sometimes achieve the opposite effect and stated that the measure is just on the “verge of legality”. Shaul Mofaz, Defense Minister at the time, ordered that the committee’s recommendations be accepted. Since 2005, the security establishment has rarely used this measure.

The habitual call for punitive demolition in response to attacks against Israelis ignores the committee’s findings and is apparently made primarily to achieve media interest and political gain.

A policy of punitive home demolition is fundamentally wrong, irrespective of effectiveness. It contravenes basic moral standards by punishing people for the misdeeds of others. B’Tselem calls upon the authorities not to demolish these homes.