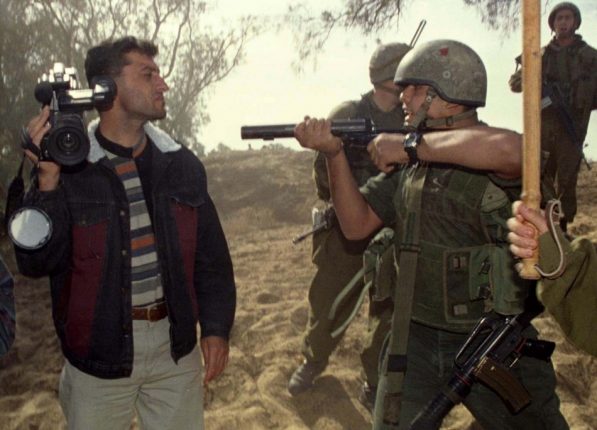 1. 5/12/2014 – Palestine TV cameraman, Bashar Mahmoud Nazzal, 36-year-old, from Qalqilia, was shot by Israeli fire during a protest against settlements in the village of Kofr Kadom.
2. 10/12/2014 – Israeli soldiers assaulted Ro’ya cameraman and director Ashraf Mohammed Dar Zeid, and prevented him from covering the popular event of olive trees planting in the town of Tormis Ayya.
3. 10/12/2014 – Israeli forces arrested the Asda’a website correspondent and the political activist Saleh Qasem from Hebron, at the checkpoint of Container near the city.

4. 10/12/2014 – Israeli forces arrested Ousama Yousef Shaheen, a correspondent working for the societies of YOU FREE and IN THE MIND, and director of Palestinian Prisoners Club for Studies and Human Rights.

6. 18/12/2014 – Israeli soldiers assaulted the freelance journalist Basam Zghayer during coverage of events in the city.

7. 23/12/2014 – A number of journalists were injured by Israeli fire during their coverage of events in the city. They are: Journalist Monjed Jado, PalMedia cameraman Samer Moghrabi, Mahmoud Olayan, Musa Qawasmi, Abed al-Hafeez Hashlamoun and Ahmad Mazhar.