MK Naftali Bennett Published on his Website “The Catastrophe – The Reality”

Bennett wrote on Facebook “Every year, on the Independence holiday, we hear the same speech repeated that the Nakba catastrophe caused by the Jews against the Palestinian Arabs. The truth is: the Jews won the war, and during the war, hundreds of thousands of Arabs fled the country to the neighboring countries”.

Comments on Bennett’s post are:
Alexander Burman: In fact, we have to know and make sure that there is nothing named the Palestinian people.

Omer Anda: And now, our National mission is to expel the remaining Arabs, and that’s why we have voted in the elections in favor of Mr. Naftali Bennett 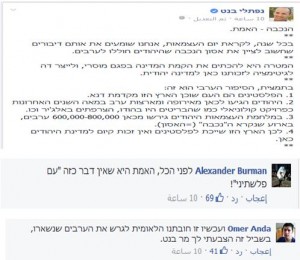