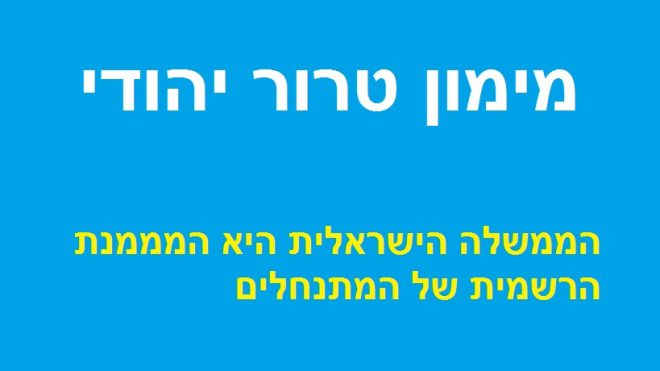 The Israeli government is the official sponsor of settlers’ terrorism

Collected and Organized by Media Center
• “Mulad” Organization for Democracy, an Israeli human rights organization, says that Israel indirectly funds the “price tag” crimes since its appearance in 2008.
• Israeli “Ir Amim’ Association revealed last year that six ministries, including the Ministry of Security, supports 27 Israeli settlement Associations that are active in order to build the alleged Third Temple on the ruins of Al-Aqsa and Dome of the Rock.
• Two years ago, the Israeli police took the initiative to form a special unit to deal with “national crime” but it did not answer the puzzle of burning the mosques and churches crimes, as long as the victim is a Palestinian.
• “Yesh Din” Organization for human rights confirms that the security forces ignorance to the crimes of the settlers falls within the phenomenon Law value disregard in general in Israel.
• “B’Tselem” Organization confirms, based on field investigations, that soldiers, in many cases, stop aside and not interfere in the settler attacks on unarmed Palestinians. It also makes clear that if the army initiated to arrest settlers while they are on their way to attack the Palestinians, the attacks would not occur. It continues that “many soldiers believe that their duty is only to protect the settlers”.
• A group of the army reserve officers confirmed in a memorandum to the Minister of Security and the commander of the army a few months ago that extremism of settlers comes out of “Blur instructions” issued by the army for soldiers in the field during their addressing the settlers’ violations.
• Former Shin Bet head, Yuval Diskin, warned in April, that the army tolerance with rabbis in some religious schools who refused to reserve for the crimes of “price tag”, but even encourage them in silence and hint.
• Former Shin Bet head Yuval Diskin said in the past week, to the Israeli public radio that the army ignorance to the crimes of the settlers against the Palestinians would return back, pointing to several attacks by settlers in recent months against the officers and the military bases.