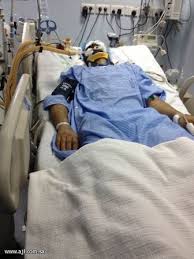 Jerusalem: The young man Karim Yousef Abu Khudair, from Jerusalem, had injuries and bruises, last night, after being attacked by settlers in Shuafat town, north of Jerusalem.
Qalqilia: A boy was injured yesterday evening in Kafr Qaddum village in Qalqilya, by a live bullet in his foot when the Israeli occupation forces suppressed a peaceful march to condemn the attempts to divide the Al-Aqsa Mosque spatially and temporally.
Bethlehem: A number of citizens suffered from suffocation, during the suppression of a peaceful demonstration in Beit Jala, to condemn the ongoing lands levelling in the “Bear U’na”, in favor of completing the work in the racial annexation wall.