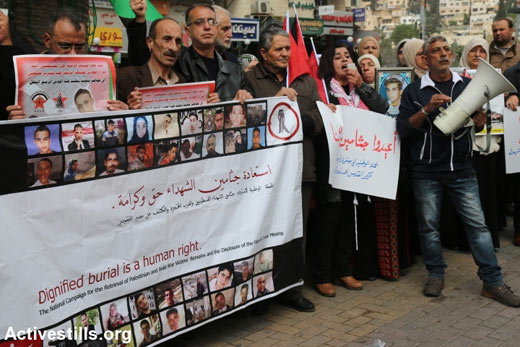 Detaining Martyrs’ Bodies is an Immoral and Unjustified Action

B’Tselem
Fifty-five bodies of Palestinians killed in the context of the wave of violence in the last three months, including the bodies of 11 minors, had not been returned to their families yet.
This step is not only a punishment for dead, but to their families also, who were not involved in the acts committed and do not assume responsibility for them. The refusal to allow families to bury the bodies of their sons causes great suffering to families and severely hardens the absorbing of death and bereavement process, and forbids the implementing of the traditional and religious customs related to the death of family members. The uncertainty over the date of returning the bodies increases this suffering with the conditions of small funeral and limited number of participants and often in the night hours.
It is a formal and explicit policy that Israel pursued and justified under the concept of deterrence of the Israeli government not to return those bodies. However, “deterrence” is not a magic word that can justify every action, and of course, it cannot justify such a policy, which extremely affects the human dignity. This policy is immoral, it also embodies the disregard for the lives of the Palestinians and their dead sons in the Israeli authorities view.