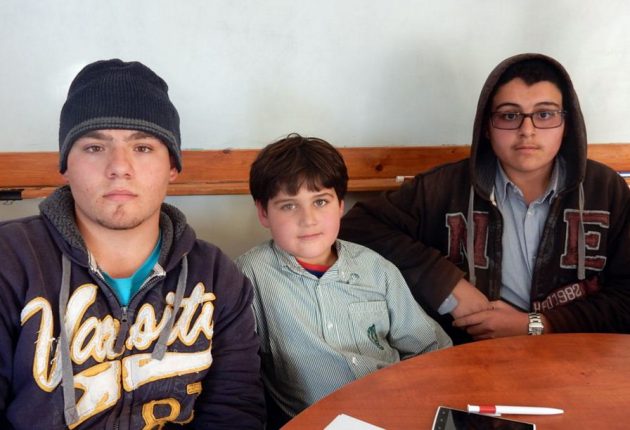 Hassan Hammad, 15, and the three brothers – Zakaria, 8, Zein, 14, and Amir Hammad – are Palestinians who are also American citizens. They live in the village of Silwad in the Ramallah district and attend a private school in Ramallah. The four boys travel to and from school on a private shuttle every day. On Wednesday, 9 December 2015, they were traveling home with their regular driver, ‘Abd al-Qaher Hammad who also lives in Silwad. At around 2:30 P.M., they were on the road that connects the villages of ‘Ein Yabrud and Silwad, after they had taken the tunnel that runs under Route 60, a main artery in the West Bank, they came across a flying checkpoint staffed by soldiers. The car stopped, and after an inspection, the soldiers let the driver drive on. Right after he started off, the soldiers fired two shots at the car, one of which shattered the back window and lodged in the windshield. The driver drove off quickly, and the boys, who suffered anxiety attacks, were treated in the local clinic in Silwad.

I have a contract with two Palestinian families who have American citizenship to drive their sons to a private school in Ramallah every morning and then back to Silwad in the afternoon. On Wednesday, 9 December 2015, at around 2:30 P.M., we were on our way to Silwad. We drove through the tunnel under Route 60 and then came across a flying checkpoint made of road spikes that the military had set up. We waited about 10-15 minutes until the soldiers finished inspecting two cars ahead of us.

When we got to them, I saw three soldiers. One of them was standing on a hill by the road and aiming his gun at me. The two soldiers who were near the checkpoint told me to stop, which I did. They told Hassan Hammad, who was sitting in the seat next to me, to get out of the car. They opened the back door and looked inside to make sure the passengers were really children with school bags. They spoke with Hassan in English, which I don’t understand. About five minutes later, they told Hassan to get back in the car and let us go.

I started the car and drove away completely normally. I had only gone about ten meters when a live bullet was fired at the car. It went through the back window and got stuck in the front windshield. I heard another shot, but I don’t know where it hit. I got really scared and the kids started screaming and crying. I hit the gas pedal to get away as fast as I could. I was in such a hurry that I veered to the shoulder and drove over large rocks. I kept fleeing. I didn’t realize I had a flat tire until I got home. At no point did I hear the soldiers tell me to stop again.

Hassan Hammad. Photo by Iyad Hadad, B’Tselem, 10 December 2015I live in Silwad with my grandfather. My parents live in the United States. I’m an American citizen and I go the a-Najah American School in Ramallah. There’s a driver who takes me and a few other students from home to school and back.

On Wednesday, 9 December, 2015, after school, I was sitting next to the driver. The brothers Amir, Zein and Zakaria Hammad, who go to school with me, were sitting in the back seat. They’re also American citizens. At around 2:30 P.M., soldiers stopped us at a flying checkpoint by the Western entrance to the village.

There were two cars ahead of us. When it was our turn, the soldiers ordered me to get out of the car. One of the soldiers started asking me in English how old I was, where I lived, why I had come from the States, if I’d thrown stones, if I’d seen any trouble or protestors and other questions like that. I answered him in a normal tone of voice, no tension at all. His questioning went on for about 5 to 7 minutes. Then he told me to get into the car and said: “Go f**k yourself”. I didn’t respond. The driver started driving away slowly. He had managed to go only about ten meters when two shots were fired, one after the other, from behind us. One bullet went through the back window and there was shattered glass everywhere. I felt like I was going to die, and everyone started screaming and crying. The driver didn’t stop and drove faster to get away..

‘Abdallah Hammad – Zakaria, Zein and Amir’s father – filed a complaint with the Palestinian DCO regarding the gunfire that placed his children’s lives in danger. In response, the military said one of the students had thrown a screwdriver at the soldiers. This claim is inconsistent with the accounts given by the driver and the boys, and there is no corroborating evidence to support it. In any event, even if there was any truth to the claim, there was no justification for firing at the car and the shots were fired in breach of the open-fire regulations. Fortunately, no one was hurt by the bullet that penetrated the car.