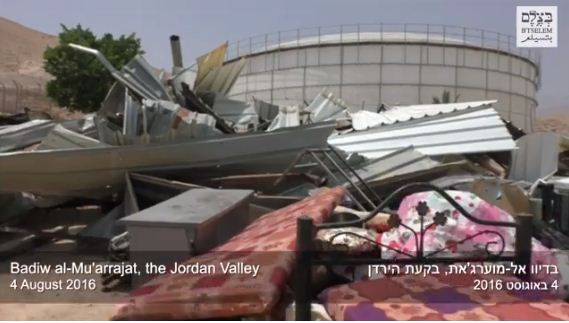 The spate of demolitions in the West Bank continues in full swing: in the past week and half, since the beginning of August 2016, Israel’s Civil Administration demolished 20 homes and 13 other structures in Palestinian communities throughout the West Bank, leaving 53 people – including 25 minors – homeless. In total, Israel has demolished at least 188 Palestinian homes in the West Bank this year – the highest number since B’Tselem began documenting home demolitions on grounds of “lack of building permit” in 2006.

All the homes demolished this month were in areas defined as Area C. Nine of them were inhabited intermittently, so their owners were not counted among the 53 persons left homeless. At least five of the demolished structures were donated by humanitarian aid organizations.

This month, the Civil Administration also demolished non-residential structures in the following Palestinian communities: Farsh al-Hawa, Khirbet a-Rakhim, and Fuqeiqis in the South Hebron Hills; a-Nueimeh and al-Jiftlik in the Jordan Valley; a-Nabi Samwil in Al-Quds District; and Sabastiya in Nablus District.

These demolitions are a direct continuation of Israel’s policy to step up and expand demolitions in the West Bank since the beginning of 2016. They were executed although Israel and the European Union are currently engaged in “structured dialogue” over home demolitions, and despite international condemnation of this policy in the Quartet Report published in early July.