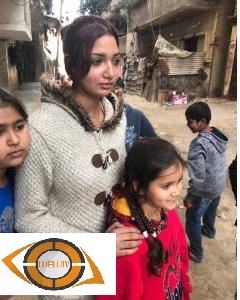 14-year-old Ghada is not the only Palestinian to be deported to Gaza Strip, but she is the youngest Palestinian to have been subjected to the worst forms of discrimination and oppression by the occupation authorities.

Ghada was born in 2003 in Ramallah city, and since then she has been living with her family in Al-Ram town, east of Jerusalem, for a father born in Gaza Strip.

On the morning of the 13th of January, the 14-year-old Palestinian girl, Ghada took her bus to Issawiya to visit her aunt in the town that lies in the east of occupied Jerusalem, but this was Ghada’s last visit to the West Bank where she was born, as she was arrested by the Israeli occupation. They took her to Beit Hanoun (Erez) crossing in the northern of Gaza Strip. Without contacting or coordinating with Ghada’s family, the girl who had never visited Gaza Strip. “This is an illegal deportation,” confirmed the lawyer Abeer Jubran.

For 16 days, Ghada has been waiting for a permission to return to her family in Al-Ram, after she was offered a shelter by a relative of her father in Gaza Strip.

The lawyer Abeer Jubran confirmed that Ghada suffers from epilepsy and she is under constant medical supervision, warning that the tension she suffers from while being away from her family may lead to negative repercussions on her condition.