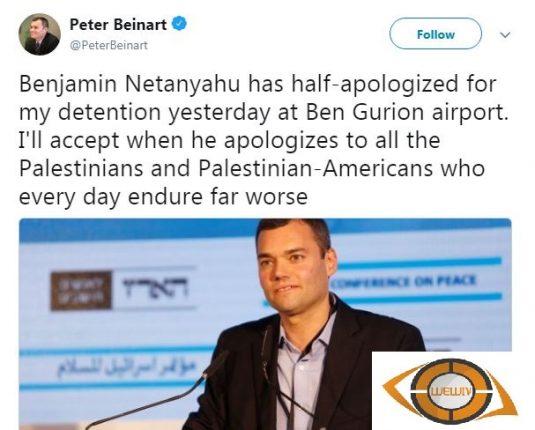 Occupation authorities investigate a U.S journalist in Airport Due to pro-Palestinian positions

Occupation violations will not exclude you even you were a Jewish who recognizes Palestinian rights.

The Atlantic newspapers editor, Peter Pernat, and a columnist on Jewish Forward newspaper, wrote on twitter “I was detained at Bin Goreon airport in Israel once I arrived, in a family visit, Sunday 12-8-2018”.

Pernart said in an article in “Forward” that he was transferred into a room the the airport, and was interrogated about reasons of his visit.

Pernart said he was investigated about a protest that he joined in Hebron in the occupied West Bank.

He said “During past weeks, at least three pro-Palestinian activists were held  and investigated by Israel occupation authorities ,on their arrival to Israe”.