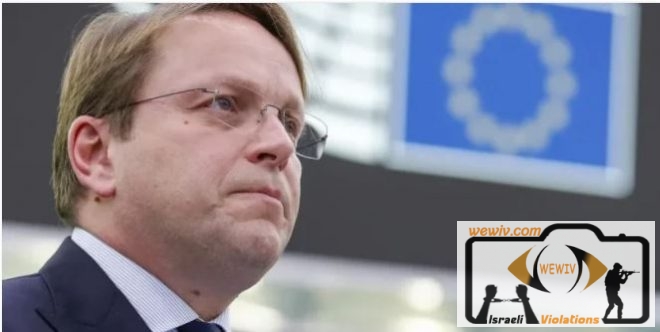 !A letter to Mr. Varhelyi

The Hungarian Delegate, the Commissioner of the European Union, Oliver Varhelyi, visited the occupied Palestinian territories this month and met with Palestinian officials in order to demand the modification of the Palestinian educational programs content as a condition prior to the continuation of the EU subsidy to the Palestinian National Authority. Varhelyi said the content of Palestinian textbooks is hostile to Israel because it includes the names of martyrs and calls for resistance to the occupation. At this time when European Union countries continue to delay the granting of the annual European grant, the Palestinian National Authority is facing enormous economic challenges due to the scarcity of economic resources, the high wage bill and the delay in international grants, including the European grant itself. This is what recently prompted 15 countries of the European Union to ask the European Commission to speed up the disbursement of emergency aid to the Palestine State. These countries, led by Ireland, expressed their concerns over the “continued delay in the disbursement of EU aid to Palestine for the year 2021 in the context of the financing conditions imposed by the Commission”.

In fact, I had hoped that Mr. Varhelyi would come with me to one of the lectures on the Palestinian question that I teach at the university, and then that he would find answers to many of the questions he posed to the Palestinian leaders. In these conferences, he will notice the enormous anger aroused on the part of the students for all the peace commitments and agreements, since Israel does not respect any of these agreements and does not seek to achieve any peace. When exposed to the Arab-Israeli wars, Mr. Varhelyi will notice how students try to hide their tears as they recall the massacres of Deir Yassin, Qastal, Sabra and Shatila, and others. Mr. Varhelyi will also easily notice that our Palestinian female students are adorned with necklaces of the historical map of Palestine, which represents the national and historical homeland of the Palestinian people. Mr. Varhelyi will also feel the amount of appreciation and sadness the students show for the souls of the martyrs and for the prisoners, given that their country is occupied and therefore the occupier must be resisted. Accordingly, Mr. Varhelyi will easily discover in his first lecture on the Palestinian question that our educational programs contain only a minimal amount of Palestinian anger and emotion towards the rejection of the occupation, which is undoubtedly much less than that stored in the memory and consciousness of Palestinian society. He will also discover that we, as teachers of the Palestinian cause, do not encourage students to resist the occupation. On the contrary, we and they share the anguish of the occupation, the sorrows of the prisoners and the tears of the mothers of the martyrs. How not? And we are all witnesses of the Nakba, and the Naksa! How not? And we are all witnesses to the daily and continuous crimes of the Israeli occupation against our Palestinian people!

On the other side, unfortunately, we see that the European Union and other donor countries turn a blind eye to the militarization of education in Israel and the enormous amount of hate speech against Arabs in Israeli school curricula. In one of the Israeli studies reviewed, researcher Dr. Eli Bode, the stages through which the teaching of history has passed in Israeli schools and found that the stereotypical image of the Arab male is still present in these books, and attempts to portray the Arab-Israeli conflict from a different angle in all Israeli textbooks have failed. In the same context, researcher Issa Qaraqii concluded in his study on the right of return in Israeli school curricula that the question of the right of return of Palestinian refugees is not addressed at all in Israeli school curricula. On the other hand, while Palestinian school curricula are accused of spreading the spirit of extremism, the Israeli Ministry of Education has drawn up a new plan for the current school year, which does not concern itself with civic education, democratic values or coexistence between Jews and Arabs, but is more concerned with two main objectives: to strengthen Judaism and Zionism, to improve internal school results. In this context, the emphasis of these programs on military education, the visitation of combat units in the occupying army and the use of military examples in the education of Israeli students are all factors that promote violence, hatred and extremism among Israeli students, which has led to radical changes in Israeli society towards the far right. As a result, when European countries ask us, knowing that we are the victims, to abandon the values of liberation and independence, they do not care about “anti-Palestinianization” and spreading hate speech and extremism in Israeli school curricula, and they are the perpetrators. It seems that they are asking us to include in our Palestinian programs only photos of the Palestinian wearing the hat and an “elegant suit” , sitting in a nice restaurant in occupied Ramallah, and politely asking the occupation, via social media, to get out of his land!