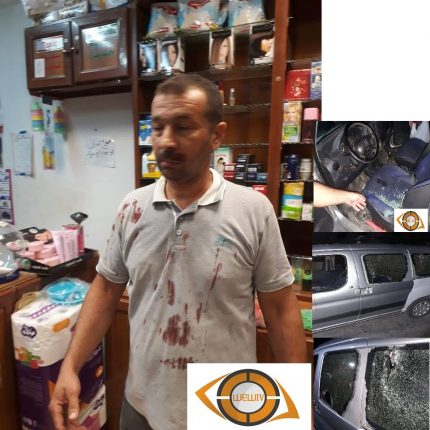 While the citizen Munther Mousa, from Tulkarm Governorate, was driving to his home with his three children, near Yitzhar settlement, a group of terrorist settlers came out of the trees and began to throw stones at his car. At the same time, a settler car closed the escape road in front of him, so that the attacking group can hit him directly.

As a result of the attack, the vehicle’s glass was smashed and its passengers were injured. The father and his three children could have lost their lives as a result of this terrorist attack. After the driver managed to escape to a nearby Palestinian village, he and his children were taken to Rafidia hospital in Nablus for treatment.

The terrorist gangs formed by terrorist settlers and protected by the occupation army, daily violate the lives of Palestinian citizens without any deterrent. Those who fund and protect them must be accounted just like any terrorist organization in the world.