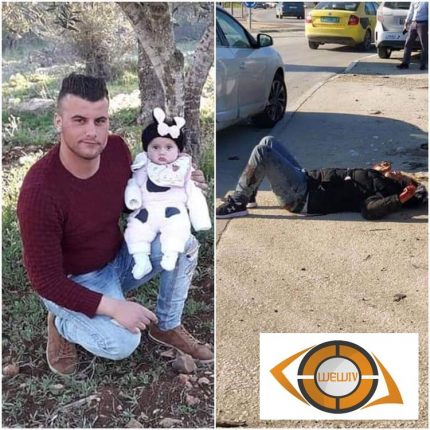 The young man Mohammed Abdel-Fattah (23 years), from Salfit, was martyred in Hawara on April 3, 1919. The occupation said that he attempted to carry out a stabbing operation. However, an investigation carried out by B’Tselem revealed that the young man threw stones at Israeli cars and then an Israeli settler stopped his car and shot him. The settler went on shooting on him and this time another settler joined him in the shooting. The two settlers killed the young Mohammed and the occupation army erased video footage that documented the incident.

B’Tselem investigation reported: The driver of the car, Yehoshua Sherman, stopped, and then gunfire heard from inside the car, and then got out of his car. At this stage, Muhammad sat between two dumpsters. Sherman approached him and fired several more shots at him. A passing truck also stopped on the street, the driver got out and then stood next to Sherman. The two fired several more shots at the young man who was lying wounded on the ground.

A young man who works in a nearby shop was hit in the abdomen by one of the shots. He was treated in Rafidiya Hospital, Nablus.

Immediately after that, about eight soldiers went into two nearby shops to check their security cameras. They dismantled a DVR in one of the shops and left. About twenty minutes later, the soldiers returned to the shop, reinstalled the DVR and watched the footage. Two soldiers filmed the screen with their mobile phones. They then erased the footage from the DVR and left.

B’Tselem’s investigation found that, contrary to media reports, Sherman’s shooting of ‘Abd al-Fatah was unjustified, as the latter had already moved away from the car. Moreover, there was clearly no justification whatsoever for the additional shots that Sherman and the truck driver fired when the young man was already lying injured on the ground.

The Israeli security forces that arrived on the scene ignored these facts. They did nothing to arrest the two settlers, The identity of both shooters is known. Whoever wants could easily track them down, at least for questioning.