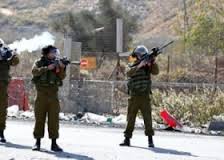 Jenin – Occupation forces also set ablaze in a garage for vehicles in Barta’a and the garage owned by Ahmed Tawfiq Aziz. Dozens of people suffocated during clashes with Israeli forces in the village and in Zububa. Clashes erupted between citizens and occupation forces that fired bullets, stun grenades and gas density.

Jenin – Dozens of people suffocated due to inhaling tear gas during clashes with occupation in Zububa, west of Jenin
Bethlehem – A number of citizens suffocated in clashes with Israeli forces at the northern entrance of Bethlehem, which inflicted several injuries because of suffocation.

Hebron – Occupation forces fired tear gas and sound towards houses near Ibrahimi Mosque in Hebron. IOF positioned at ‘Container’ military checkpoint in Abu Al Reesh near Patriarchs Cave towards the houses, so a number of citizens suffocated.