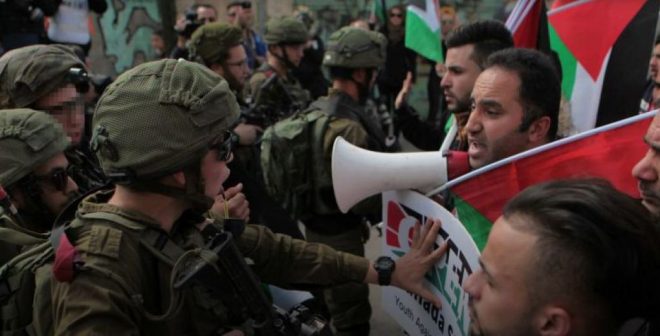 Human Rights Watch issued a report under the title of “Without Rights Since Birth“, saying that Israeli occupation army denied generations of Palestinians in the West Bank from their basic civil rights, depending in military orders issued since the first days of occupation. It added that continuation of blocking basic rights for more than half of a century – without any changes – is violating Israeli commitments to laws.

The report stated that in August 1967, Israeli army issued the “military order number 101” that criminalizes participation in gatherings of more than 10 persons concerning any subject “that can be interpreted as political”. Punishment for such participation is up to a 10-year-sentence of prison. After more than 52 years, Israeli army continues to arrested an prosecute Palestinians according the defense law of 1945 and the military order of 101 of 1967.

in 2010, Israeli army issued the “military order number 1651” that imposes sentences of 10 years on any Palestinian “trying to affect the opinion of the public in the West Bank, verbally or any other way”.

The report also says that Israeli occupation authorities denies its commitments in the rights of Palestinian in the occupied West Bank, including commitments to the laws of “international human rights committee” and “International Justice Court” which decided a legal opinion in 2004 stating that the most important international convention of civil and political rights – “International Convention Concerning Civil and Political Rights” – “Actions practiced by a state during jurisdiction outside its lands”, as well as law of the occupation.

The report says that Israeli army must cancel two military orders of 101 and 1651 and stop accusing defenders according to defense law of 1945. after 52 years of occupation, Israel must guarantee public order and public safety in a way the respect and protects basic rights of Palestinians.