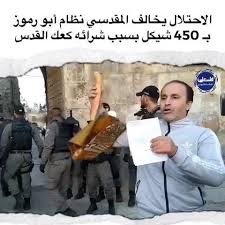 The madness of  the occupation in  the occupied  city of Jerusalem exceeded all limits until it reached the point that the occupation fined a Palestinian from Jerusalem called (nezam Bu Rumooz), an amount of (450 shekels) (130 Dollars). and the accusation is:

handing  out cakes to the worshipers leaving the Al-Aqsa Mosque!