In this inflammatory opinion, the journalist Assaf Jebor is exploring a series of precautionary procedures taking by the PA in order to fight Coronavirus outbreak, but he tries to show them as unfair steps against settlers. He also accuses the PA of placing fake charges against Israel, but forgot that minister of Israeli army, Neftali Bennet, imposed a siege around the city of Bethlehem and prevented any person from moving from the Palestinian territories to the lands of 1948, immediately after knowing that a group of Greece tourists is infected with Coronavirus. 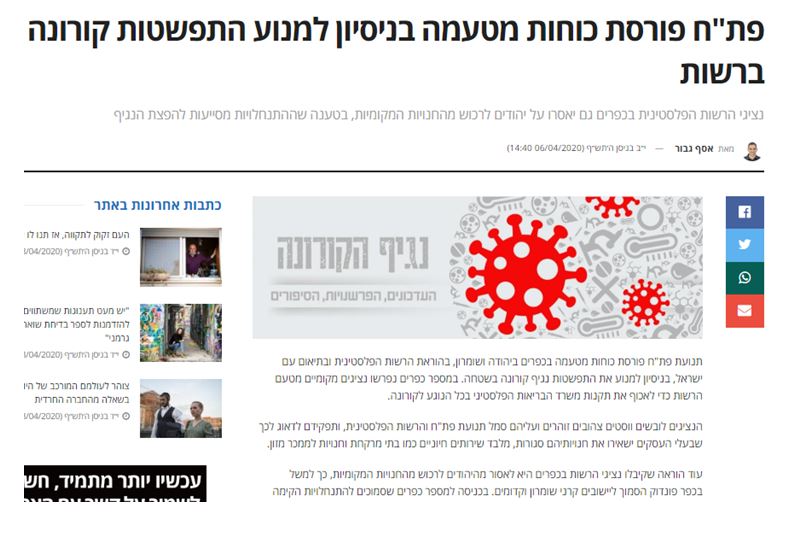 In another opinion published in “Israel Hayom” newspaper, the writer claims that “Israel helps Palestinians to fight Coronavirus outbreak while the PA accuses Israel of spreading the virus before the eyes of the world”. The writer said that “Ibrahim Mansour, the Palestinian representative in the UN, wrote a letter to the UN members saying that Israel soldiers are deliberately spitting on Palestinian vehicles and houses’ doors in order to terrorize local residents. He also claims that construction materials – designed to build first aid tents to help Coronavirus patients – have been banned”. 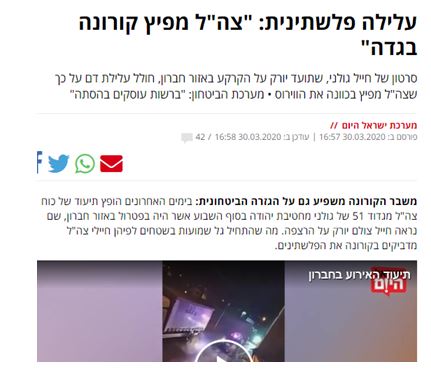 In a racist opinion written by the journalist Amir Afifi in “Israel Hayom” newspaper under the title of “Having Influence is so Important Now”, the writer said that “Israel is at historical crossroad” … “the reality in the Middle east requires having unilateral influence, exactly as happened in Jerusalem and The Golan Heights”.

The politician Anat Berko wrote on Facebook: “The terrorist Tereza, died since a short time, was not actually a mother .. It was not the first time to find out the relationship between the Jewish Arabian movements and the support of the Arab terrorism against Jews”.

Israeli Ambassador to the UN, Danny Danon, wrote of Facebook inciting against the Palestinian Authority: “Palestinians in the UN raised a negative impression by claiming that soldiers are impeding the PA efforts to fight Coronavirus outbreak and that soldiers are spitting on Palestinian vehicles in order to scare them. Even in world crisis time, the Palestinian leadership continues to spread lies before the international community and records a new level of ingratitude”. 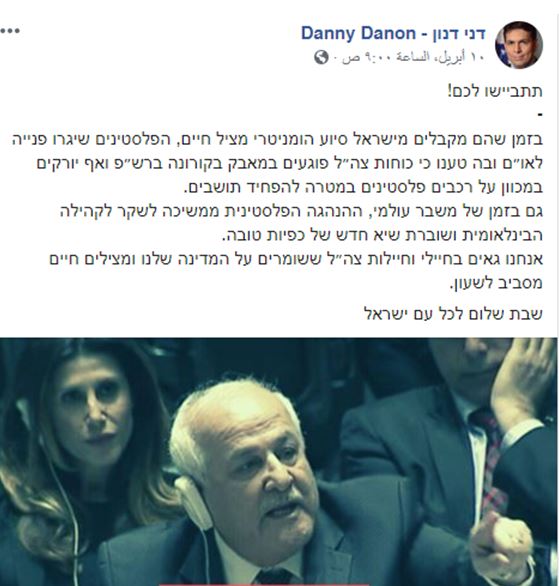