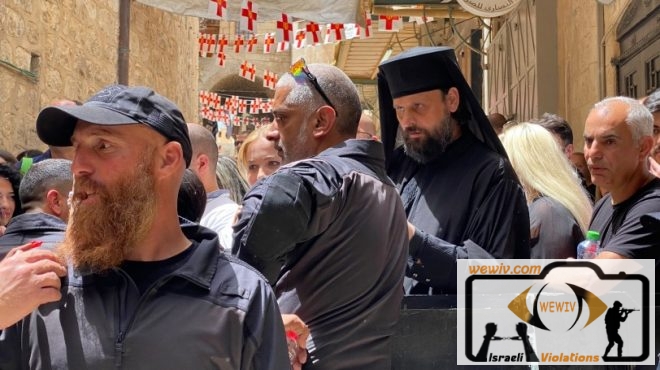 Settlers and the attacking Islamic and Christian sanctities

The brutal attacks against the Church of the Holy Sepulcher and the worshipers celebrating Holy Saturday is a new crime to be added to the settler crimes record. The occupation authorities imposed a complete closure on the area to prevent the arrival of large numbers of worshipers to pray in the church and set up checkpoints and attacked the sanctity of churches by their weapons, in an explicit provocation of the Christian worshipers, which constitutes a flagrant violation of the principles of Human rights, foremost among which is the right to access places of worship and holy places and to pray therein freely.

The continuation and recurrence of attacks is a disregard for the feelings of Christians, a desecration of their sanctities, and practicing hatred, grudge and racism in their national and religious dimensions by the occupation army and with instructions from the political level. It is an integral part of the process of Israelization and Judaization of Jerusalem and its sanctities, especially the blessed Al-Aqsa Mosque.

The conflict is raging with the settlers themselves, as their movement was formed under the auspices of the occupation army and the complicity of the Israeli political level with their extremist programs, which led to the continuation of the settlers’ orgy in the courtyards of the Al-Aqsa Mosque, accompanied by unprecedented violence by the occupation police and the special forces of repression. The occupation government did not differentiate in its dealings between Muslims and Christians in Jerusalem. The steps of repression extended to churches and targeted the Christian presence as well in an Israeli war against the cultural and religious heritage of the Palestinian people and provided everything necessary to provide cover for the settlers’ practices on the pretext of practicing their religious rituals on Al-Aqsa Mosque, as they put it, knowing and fully aware that the issue is not related to the practice of religious rites, but it refers to the colonial intentions and the Judaizing goal of Jerusalem…

The occupation government continues its crimes against the Palestinian people and their Islamic and Christian sanctities, and extends to include Christian holidays without any consideration of the consequences in light of the continued silence of the international community, as is clear in its repeated attacks on Al-Aqsa Mosque, Al-Haram Al-Sharif, Palestinian worshipers and the Church of the Holy Sepulcher, and its resumption of its air raids on the besieged Gaza Strip, which endangers the lives of civilians and cause massive damage