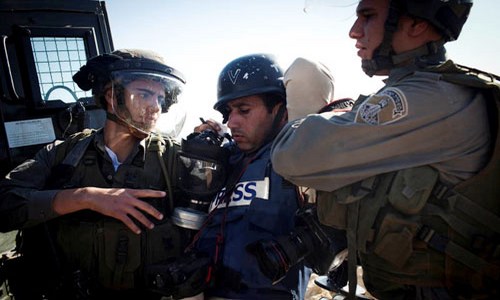 On the eve of the International Day to combat Torture, which is on June 26 of every year, the Israeli occupation used all kinds of internationally prohibited weapons against media freedoms in the Palestinian territories in an attempt to kill the image and word that exposes its crimes, the most recent of which was the deliberately assassination of the journalist Shireen Abu Akleh and the journalist Ghufran Warasna with live bullets, the rise of the number of detained journalists to (16).

From the beginning of 2022 until today, June 26, 2022, the number of the occupation violations has reached (405). The number of attacks, targeting and injuries against journalists by the Israeli occupation forces and its settlers increased, and they were two cases of murders, and (134) cases of assault and injury.

Palestinian journalists were subjected to (47) cases of arrest, detention, summoning and deportation.

(150) cases of banning journalists and obstructing the practice of their work and preventing them from covering events were noticed. (14) cases of incitement, accusations and tracking of journalists and media institutions, and (22) cases of storming, raiding, home searching and destroying press equipment. And (8) cases of confiscation of press devices, equipment and materials, and (10) cases of harassment and torture of journalists and forcing them to pay a fine inside the occupation prisons.