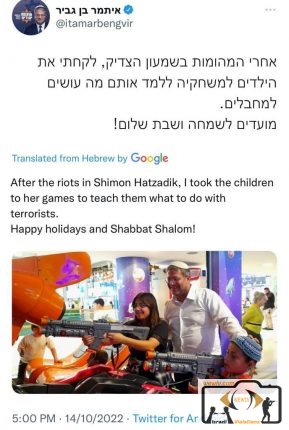 A far-right member of the Israeli Knesset (Itamar Ben Gvir) attacks Palestinians in Sheikh Jarrah neighborhood in occupied Jerusalem, along with settler gangs.

And here, after Ben Gvir had finished practicing his terror against the Palestinians in occupied Jerusalem, he went to his Twitter account to publish ostentatiously about how he raises his children on violence and bearing arms.

Do the United States and the West see this? Or they don’t care?

It is a state terrorism that the world must stop.