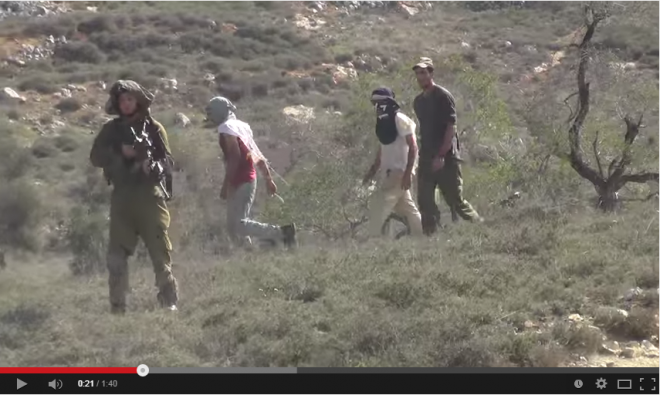 Yesterday, a few hours after the shocking terror attack in Jerusalem, a group of some fifty Israelis left the settlement of Yitzhar, walking to the edge of the Palestinian village of Urif. The Israeli civilians, most of whom were masked, attacked the residents of the village with stones, iron bars, and burning tires. Soldiers who arrived on the scene several minutes after the incident began did nothing to stop or detain the Israeli civilians, and effectively guarded them as they continued their attack. The soldiers fired crowd-dispersal means at young Palestinians who gathered on the edge of the village. A 13-year-old student from the village school was lightly injured in the incident: the boy was struck on the head by a stone and received medical treatment at Rafidiya Hospital in Nablus.

Yesh Din emphasizes that IDF soldiers bear an obligation under international law, and in accordance with Israeli Supreme Court rulings, to protect Palestinian residents against violence. IDF soldiers are fully empowered to detain suspects, including Israeli suspects, pending the arrival of the police. However, Yesh Din has documented the repeated failure of IDF forces to meet this obligation. The incident documented here is merely the latest of its kind to be brought to our attention.

Attorney Emily Schaeffer Omer-Man, Legal Advisor to Yesh Din’s Criminal Accountability of Israeli Security Forces project, comments on the video footage: “Once again we discover IDF soldiers failing to meet their obligation to protect Palestinians subjected to vicious attacks by settlers in their own backyards. The disturbing video footage demands vigorous investigation and the immediate prosecution of the soldiers involved. An examination must also be carried out of whether the soldiers’ commanders bear liability for the conduct of their subordinates.”