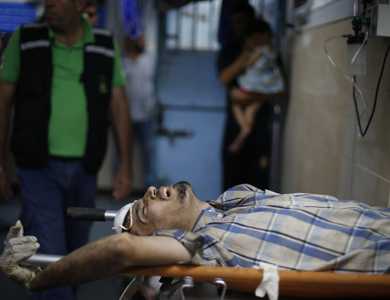 Jerusalem- The Israeli forces detained the citizen Nidal Al-Fasfus while returning from hospital in Jerusalem where he went for treatment after he was exposed to a work accident, they also beat him severely.

Ramallah – The Kamal Ismail Safi (17 years) was shot in his lower abdomen, during clashes between youths and Israeli forces when they stormed Beitillu village.

Hebron – A settler, accompanied by a security officer who is responsible for cattle farms of Carmiel settlers, assaulted the youth Zayid Sulyman I’ed Al-Hathalin (21 years), while he was grazing his sheep near the mentioned settlement, he was injured with bruises and contusions.