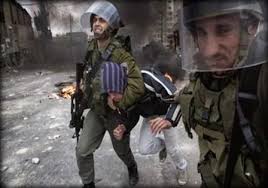 Jerusalem: Israeli police arrested a citizen from Hebron on the suspicion of stabbing an Israeli settler near Jerusalem.
Bethlehem: IOF arrested Hozayfa Ibrahim Lafi Shoushe 22-year-old from the town of Hosan.

Hebro: IOF arrested Tareq and Nizar Nedal Salhab from the area of Tal al-Rameedah in Hebron.

Hebron: IOF raided the area of al-Suwaneh near the town of Soreef and arrested the citizen Jehad Hamad Issa Barade’yah.

Hebron: IOF arrested the citizen Somaia, the daughter of the detainee Ibrahim Abdullah Ghunemat in the Israeli prisons, from the town of Soreef.