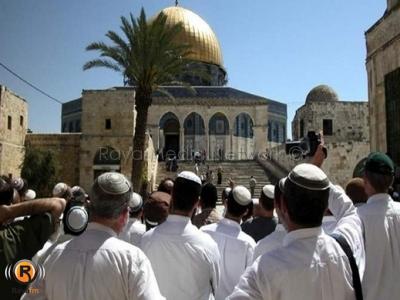 Jerusalem: Israeli police erected metal barricades again close to the gates of Al-Aqsa Mosque, which prevented 40 stationing women listed in a list distributed to the soldiers on Al-Aqsa gates from entering to the mosque, which caused them to organize a protest in front of the Chain Gate.
Jerusalem: Settler groups renewed storming Al-Aqsa Mosque from Mughrabi Gate, and started provocative and suspicious tours, accompanied by a number of ‘rabbis’, while they were confronted by worshipers and students Tkbeir shouts.