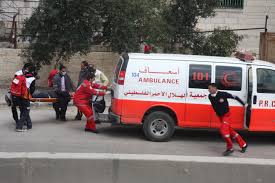 Ramallah: The child Adel Khader Shaheen, (two years) was injured today in his head by an Israeli military vehicle in Bir Nabala town, and he was transferred to Palestine Medical Complex in Ramallah for treatment.
Bethlehem: Six young men were wounded with rubber-coated metal bullets and another one was directly wounded with a tear gas canister on Saturday, during the clashes that erupted at the northern entrance to Bethlehem between young people and the occupation forces.
Hebron: A number of citizens suffered from suffocation because of inhaling tear gas launched by the Israeli occupation forces in the Mount of Ar-Rahma in Hebron, tonight, and the Israeli soldiers arrested a citizen and his son, and confiscated their vehicle after breaking into their house.
Qalqilya: Ten citizens were injured with rubber-coated metal bullets and about 25 others were suffocated during clashes with Israeli troops on Saturday evening in Naqqar neighborhood, west of Qalqilya, and in Al-U’mmal Crossing in the north of the city, and arrested a citizen after injuring him with a live metal bullet.