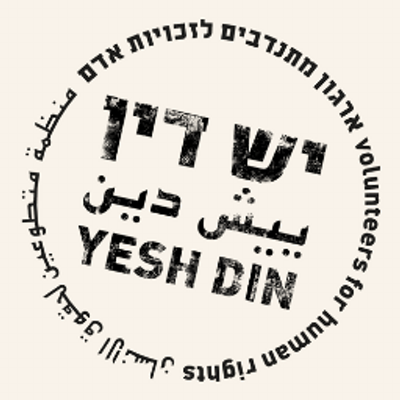 “Yesh Din” today (Wednesday) published its latest figures on law enforcement on IDF soldiers suspected of harming Palestinians and their property in the West Bank and the Gaza Strip. This data is based on information provided annually by the IDF Spokesperson at Yesh Din’s request, and on Yesh Din’s long-term monitoring of these figures.

The data sheet reflects a low indictment rate, which based on our monitoring, reveals the deep, ongoing failure to conduct exhaustive investigations that lead to indictments. The result is near impunity from prosecution for IDF soldiers because many of these investigations open only after a preliminary inquiry has been conducted, the IDF usually knows who the suspects are and is able to find them relatively easily, and that many Palestinians choose not to report comparatively light cases in the first place.

The data sheet also demonstrates that although most MPCID criminal investigations conducted in the past few years addressed violence or bodily injury caused to Palestinians by soldiers, most of the indictments served in 2014 concerned property and bribery offenses. This is also true for indictments served in 2014 following investigations opened in 2013 (9 out of 15 cases).

Many of the offenses that did lead to indictments involved theft of small amounts of money or possessions with little value. More grave incidents, in which Palestinian civilians were either killed or wounded, hardly ever led to indictments over the past year. The only indictment served regarding a fatality in 2014, the death a Palestinian civilian shot in breach of the open-fire regulations, ended in an acquittal without holding a full trial. The remaining five indictments concerned violent incidents in which soldiers beat or assaulted handcuffed Palestinian detainees in custody.

The data that collected, as well as Yesh Din’s experience gained through monitoring complaints field by Palestinians following harm caused by soldiers point to a lack of oversight and coordination between the two law enforcement bodies inside the IDF (the MPCID and the Military Advocate General’s Corps, MAGC) and unreasonably lengthy law enforcement procedures.

The military does not currently have a single body charged with processing complaints, monitoring the progress of preliminary inquiries and investigations and recording how long investigations take with an overall systemic outlook geared toward effective, exhaustive investigations.

Policies concerning monitoring and oversight of investigations are carried out by the Military Advocate General’s Corps, the body in charge of law enforcement inside the IDF. Yet these policies completely contradict the recommendations published by two official commissions of inquiry – the Turkel Commission and the Ciechanover Commission. Both commissions addressed the need for clearly defined timetables for each stage of the criminal process. More poignantly, both commissions expressly determined that the Military Advocate General is the body responsible for overseeing and monitoring this process, as well as for publishing annual figures, a duty it does not perform.

These two issues – lack of coordination and oversight by the MAGC and the unreasonably lengthy law enforcement process – critically impact the quality of law enforcement on IDF soldiers suspected of harming Palestinians. Yesh Din monitoring data demonstrates that this system is ineffective, and fails to deter against offenses or provide protection for Palestinian residents. The result is impunity for security forces personnel who commit offenses against Palestinians in the OPT, which is subject to Israel’s control.

Noa Cohen of Yesh Din’s research department: “Year after year, figures show that soldiers who harm Palestinians are not held accountable for their actions. This year, the ability of the IDF’s law enforcement system to monitor and supervise seems to be digressing. The unreasonably slow progress of the investigations, the low rate of indictments, the fact that incidents involving death or injury rarely lead to indictments and the lenient penalties are evident from the data, and essentially grant soldiers near impunity. In light of these figures, one wonders just how seriously the military takes offenses soldiers commit against Palestinians.