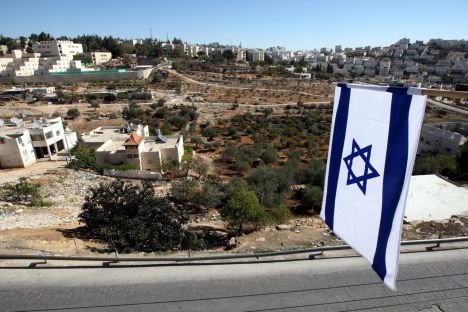 “Building authorization” is the administrative term that launches the process for building new homes for settlers in the territories. Such an authorization, which will allow the expansion of the Jewish community in Hebron onto lands that are subject to dispute and where an army base now stands, was issued during Moshe Ya’alon’s tenure as defense minister and was recently approved by Defense Minister Avigdor Lieberman, as reported here on Monday.
This land, part of which once housed Hebron’s central bus station, was expropriated for military use in 1983 in accordance with regulations. But now, contrary to a ruling by the High Court of Justice, Jewish homes are slated to be built there.
The High Court indeed stated that if it could be proven that some of the land belongs to Jews, it would be possible to free up that portion of the land for civilian purposes. But the land in question apparently has plots that belong to Jews and plots that belong to Palestinians. In convoluted legal language, the court stated that first the military expropriation must be canceled before the construction can be approved, and then those entities seeking to build and the Defense Ministry must prove that the plots they want are Jewish-owned.

But interpreting this construction process as a purely legal matter obscures the fundamental issue, which is that building settlements and bringing Jews to live in the occupied areas violates international law and conventions to which Israel is a signatory.
Aside from the legal considerations, it must be recalled that Hebron is a focal point of constant tension and confrontation between Jews and Palestinians. Any change in the urban structure and every additional Jewish presence in the city only increase the potential for violence and Palestinian protests. Those who incessantly complain about Palestinian incitement cannot do so with clean hands if they approve a construction project that will assuredly provoke anger and hatred.
The claim that this area will remain in Israeli hands under any diplomatic agreement is a sham at best. The peace negotiations are frozen, with no chance for resuming them in sight. Nevertheless, in Hebron, as elsewhere, Israel steals land and expands settlement construction as if the border has already been drawn.
Thus, even Prime Minister Benjamin Netanyahu’s call to renew the negotiations without preconditions is nothing more than a fraud, since as long as he allows construction in the territories he is creating facts on the ground on the assumption that they will form a basis for Palestinian concessions. Since it’s difficult to expect the Israeli government to observe international law when it seeks to appease the settlers, it would be best if international agencies, the United States and the European Union would show more respect for this law, which they are responsible for upholding.