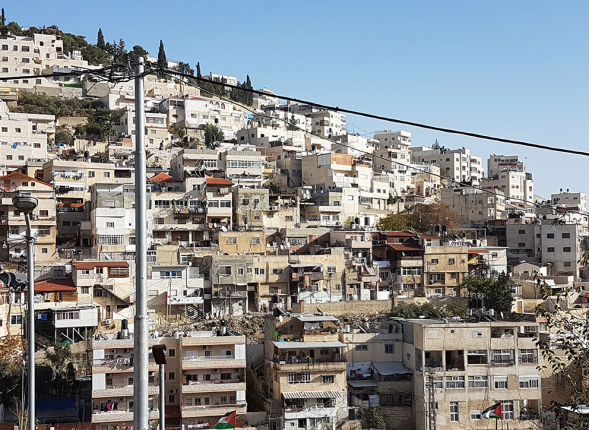 Batan al-Hawa neighborhood, Silwan: The next target for “Judaization” of E. J’alem

The Batan al-Hawa neighborhood, in the heart of Silwan, is the setting for the most extensive expulsion in recent years in East Jerusalem. To date, eviction claims have been filed against 81 Palestinian families that have been living in Batan al-Hawa for decades. According to the UN Office for the Coordination of Humanitarian Affairs, this number reflects a third of all families under threat of dispossession on the basis ethnicity in the city.

Ever since Israel annexed East Jerusalem, Israeli authorities have employed discriminatory policies against the city’s Palestinian residents, and have worked in different ways toward decreasing their number while increasing the number of Jewish residents, with a view to achieving demographic and geographic conditions that would obstruct any future attempts to question Israeli sovereignty over East Jerusalem. As part of these efforts, Israeli authorities have confiscated hundreds of hectares of land from the Palestinian population and built 12 neighborhoods designed exclusively for the Jewish population in the occupied area that was annexed to Israel. In terms of international law, the status of these neighborhoods is no different than that of the settlements elsewhere in the West Bank.

In recent years, in addition to the housing shortage, poor or lacking infrastructure, services and government funding that affect all East Jerusalem residents, various government ministries and the Jerusalem Municipality have mobilized to help the settler organization Ateret Cohamin dispossess Palestinian families living in the neighborhood of Batan al-Hawa, and hand over their homes to Jewish settlers. Israel’s courts have given the seal of approval to every aspect of this process, despite its being a legal justification for organized state violence in pursuit of an unlawful end – the forcible transfer of protected persons from their homes in an occupied territory.

B’Tselem has undertaken a neighborhood survey, and mapped the processes underway in Batan al-Hawa. According to the survey, the neighborhood is divided into some 50 parcels, nine of which have been handed over to Ateret Cohanim, including five that are already in use by settlers. To date, Ateret Cohanim has filed eviction claims against 81 families, all living in Parcel 96 which covers 0.26 hectares in the center of the neighborhood. Most of the claims were filed over the course of 2015. The municipality has fined two more families, who live in Parcel No. 84, and issued demolition orders for parts of their homes on the grounds that they had encroached on land that belongs to the settler association. Ateret Cohanim already has possession of six buildings in the neighborhood, containing 27 housing units, most of which had been home to Palestinian families. The expulsion of these families from homes they had lived in for decades, purportedly as a measure of law enforcement, as the houses had been Jewish-owned prior to the 1948 War, would make some of the neighborhood’s residents refugees for a second time, after having already been expelled from their homes in that war.

The government dispossession apparatus in action

The Ateret Cohanim association began efforts to seize properties and establish a Jewish settlement in Batan al-Hawa in 2001. It modus operandi rests on manipulating a combination of three laws passed by Israel since 1948, which allow Jews, and Jews only, to demand that the Custodian of Absentee Property hand over ownership rights to property in the annexed area that had been owned by Jews prior to 1948, but ended up beyond the country’s borders after the war. Settlers sometimes purchase ownership rights from the Jewish heirs to the land. In other cases, aided by the state, they are given permission to manage the trusts that owned the property before 1948. They then contact the Custodian of Absentee Property who hands over the property to them. Another avenue pursued by the settlers is to have the Custodian sell them property in the neighborhoods directly. These are usually properties where Palestinians live, and the settlers file actions to have them evicted. In stark contrast to the significant efforts Israel makes to restore property to Jewish ownership, the state does not even allow Palestinians to demand restoration of property they owned in west Jerusalem prior to 1948.

בשנת In 2001, the Jerusalem District Court sanctioned the decision made by the Custodian of Absentee Property to hand over to Ateret Cohanim the management of the Benvenisti Trust, a Jewish trust that operated in the late nineteenth and early twentieth Centuries. In 2002, the Custodian released to the Trust Parcels 95 and 96, where the families now facing eviction live. In 2005, the Custodian sold the association another 0.3-hectare area (Parcels 73, 75, 84 and 97), where ten more Palestinian families live.

The pressure on families who live in a property the settlers want for themselves often puts them in a cruel dilemma – agree to leave in return for significant sums of money, or refuse and still risk losing the property (a very real possibility given the expulsion of other families in the neighborhood), accruing serious debt and suffering harassment.

Tension and violence – an everyday reality

The settler presence has changed the neighborhood. In addition to the hardships that come with the settlers – lawsuits, invasion of privacy, economic duress, daily harassment of residents and the resulting clashes between local youths and the settlers, often involving stone throwing – there is now an added presence of the Israel Police, the Border Police and private security guards paid for by the Ministry of Housing. They too use violence against Palestinian residents, threaten them, arrest minors and disrupt life. The stronger the hold settlers have in the neighborhood of Batan al-Hawa, the greater the number of Palestinians directly impacted by the settler security apparatus, even without being expelled from their homes.

The end goal: “Judaization” of Jerusalem

The settlement in Batan al-Hawa, advanced by Ateret Cohanim, is part and parcel of the efforts made by the authorities and settler associations to increase and cement Jewish presence in Jerusalem’s Old City Basin: in the Old City’s Muslim Quarter and the Palestinian neighborhoods that surround it. There are currently about 2,800 settlers living in some 140 buildings located in the heart of Palestinian neighborhoods in and around the Old City – an area that is home to about 100,000 Palestinians.

According to figures by the NGOs Peace Now and Ir Amim, the number of settlers living in Palestinian neighborhoods in the Old City Basin has seen a 70% spike between 2009 and 2016. An increase of 39% in the number of new construction sites designated for Jews in Palestinian neighborhoods in East Jerusalem has also been recorded. During this time, 68 Palestinian families were evicted in Sheikh Jarrah, Silwan and the Muslim Quarter, 55 of them over the last two years. According to UN figures, settler organizations have filed eviction actions against at least 180 Palestinian families throughout East Jerusalem, usually based on claims of ownership over the building and loss of protected tenant status by the Palestinian families. As a result, 818 Palestinians throughout the city, including 372 children, are facing expulsion from their homes.