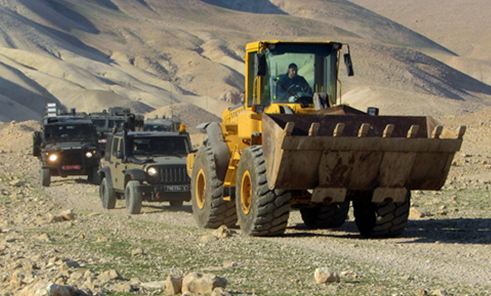 As they do every winter, Civil Administration forces demolish homes in Khirbet ‘Ein Karzaliyah

Monday, 23 January 2017, Civil Administration forces arrived at the small shepherding community of Khirbet ‘Ein Karzaliyah, living some 5 km southwest of the Palestinian village al-Jiftlik, in the Jordan Valley. The community is home to three families. The forces demolished tents used as living quarters by two of them, leaving 13 people, including six minors, without a roof over their heads. The forces also destroyed two livestock pens and razed part of the access road leading to the isolated community. In February 2016, the authorities demolished three tents in the community, and destroyed its access road. Over the course of 2015, the Civil Administration destroyed homes in the community on two different occasions, lastly in March, when they also razed the access road. The Civil Administration demolished structures in the community in 2014 as well. In 1972, the military declared the area where Khirbet ‘Ein Karzaliyah is located a closed military zone (No. 904), claiming it needed it as a training zone.