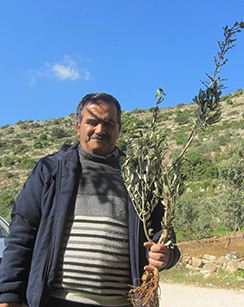 On 3 April 2017, Civil Administration officials came with bulldozers to Wadi Qana, in the Qalqiliyah area. They uprooted 135 olive tree saplings on land belonging to the ‘Awad family from the village of Deir Istiya.

Wadi Qana is one of the tributaries of the Yarkon River. The central section of the wadi, to the east of Qalqiliyah has several fresh water springs. The land in the wadi in this area is owned by Palestinians, mainly residents of the nearby village of Deir Istiya, who use it for farming and pasture. Farmers used to rely on the springs for irrigation, but in the 1970s and 1980s, several settlements were established on the hills overlooking the wadi. As the settlements discharged their wastewater into the wadi, contaminating the springs, farmers were forced to switch to crops that require little irrigation, such as olives.

In 1983, the Nature Reserves and National Parks Unit of the Civil Administration established the Nahal Qana Reserve, declaring a nature reserve on an area of roughly 1,400 hectares along the valley floor of Wadi Qana and its surrounding slopes. Under the Oslo Accords, signed about a decade later, the reserve was designated Area C, land which Israel treats as its own territory. The declaration of land belonging to local residents as a nature reserve means an absolute ban on planting trees and farming, and the loss of an important source of income.

In addition, Israel plans to use the Separation Barrier to cut off Wadi Qana from landowners in Deir Istiya, with Israel taking over a great deal of additional land that would also be made inaccessible to Palestinians. While the Separation Barrier in Wadi Qana has yet to be constructed, Israel already treats the wadi as its own for all intents and purposes, and imposes restrictions on Palestinian use of the area. In contrast, Israeli authorities turn a blind eye to illegal activities by settlers in the nature reserve, such as massive construction, building roads, and discharging wastewater into the wadi. Some 100 homes in the settlements of Yaqir, Nofim, and Karnei Shomron were constructed within the area of the reserve and, in 2014, master plans were submitted for them which include rezoning areas from a nature reserve to residential.

The 1.2-hecatre olive grove uprooted was owned by the ‘Awad family of Deir Istiya. The family’s patriarch, Muhammad ‘Awad, passed away in 2004 and his children, who inherited the land, began planting olive trees there in 2006. Several years later, in 2012, the Civil Administration uprooted the trees. In 2013, the heirs replanted their various plots, planting 135 olive trees in all. On 6 February 2017, Civil Administration officials served the landowners with an order “to evacuate the Nahal Qana Nature Reserve/National Park, wherein you are unlawfully present… Description of obstruction: Olive plot”. The village council contacted Palestinian Authority officials and the local DCO on behalf of the family, but to no avail.

Israeli actions aimed at displacing Palestinians from Wadi Qana and de facto annexation of the land are composed of a variety of methods, similar to those employed elsewhere in the West Bank. What these practices have in common is the way in which they harm Palestinian residents and promote Israeli interests, including the settlement enterprise. In the case of Wadi Qana, these practices include declaring a nature reserve, designating land as Area C, the planned route of the Separation Barrier and settlement expansion.

Like other Palestinian villages, Deir Istiya is plagued by high rates of unemployment, partly the result of the many restrictions imposed by occupation authorities. Most of the village’s land is situated in Area C, and Israel forbids use of the land for development, industry or commercial purposes. Farming, both in and outside of Wadi Qana, constitutes one of the few sources of livelihood available to the residents.

Israel’s declaration of a Palestinian area as a “nature reserve” is hard to credit as being motivated by purely environmental concerns, as can be clearly seen when one examines the enforcement of rules protecting the reserve: when it leads to Palestinian dispossession protection is promoted, and relaxed when it accommodates the agenda of settlement expansion. In any event, nature conservation in the West Bank ought to serve the Palestinian public, yet Israel mostly declares natural reserves in order to exclude Palestinians from their land, while allowing settlers to make use of the land. Israel has declared tens of thousands of hectares – 14% of Area C – nature reserves or national parks. Israeli authorities then restrict Palestinians’ use of the and do not allow them to build or develop there, just as Israel does elsewhere by declaring firing zones and state land.