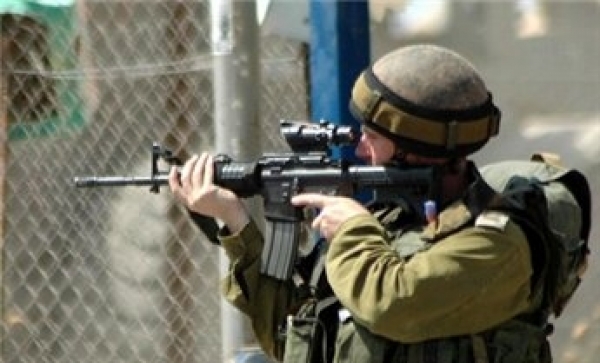 Nine Jerusalemites were injured during clashes between Palestinian worshipers and Israeli forces in the neighborhoods of the city, after preventing young people aged less than 50 years from entering to Al-Aqsa Mosque, to perform noon prayers. That caused hundreds of worshipers to perform Friday prayers at the gates of Al-Aqsa Mosque and the alleys of Jerusalem’s Old City, and the doors and the roads leading to it.

A citizen was slightly wounded on Friday, and dozens of citizens and international activists were suffocated when the occupation forces suppressed a peaceful march in Bali’in village. The Israeli soldiers attacked the march, as it approached to the land confiscated to build the wall, using poison gas, stun grenades and rubber coated metal bullets, injuring the young Ahmad Bernat (19 years old) with a gas canister in his hand and dozens of citizens and peace activists and international solidarity activists suffered from suffocation in various degrees.

The Israeli forces suppressed An-Nabi Saleh weekly march against settlement, which resulted in the injury of a number of citizens with rubber bullets and dozens with suffocation because of inhaling tear gas.

Three youths were injured by rubber bullets during clashes near the A’tara checkpoint, between A’tara and Bir Zeit villges. The youths threw stones at Israeli soldiers stationed on the permanent checkpoint, while the soldiers threw tear gas, rubber bullets and stun grenades toward the youths.

A large number of citizens were injured with suffocation after being attacked by the Israeli forces in a peaceful march in Qaryout village. The Israeli occupation soldiers fired a large number of tear gas canisters towards citizens who started a march in the town center towards stolen lands.

Dozens of citizens were injured with suffocation as the occupation forces suppressed Kufur Qaddum weekly peaceful march called for by Fatah Movement to commemorate the 26th anniversary of Khalil Al-Wazir ‘Abu Jihad’ martyrdom and on the occasion of the prisoners’ Day. The Israeli soldiers fired rubber-coated metal bullets, stun grenades and gas in addition to spraying the marchers with polluted chemical water, injuring dozens of people with suffocation, including children and members of media who were treated in the field.