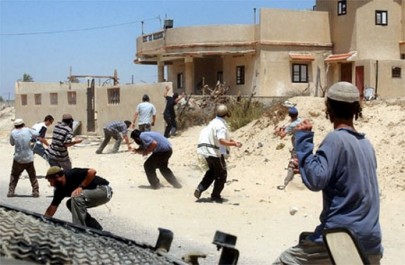 – On 11/1/2012, a group of settlers wrote offensive slogans against Islam and the Prophet Muhammad peace be upon him on the walls of Ali bin Abi Talib mosque in Dirstia villige in Salfit Governorate.

– On 5/2/2012, a group of extremist Jewish wrote anti-Christian expressions on the walls of Wadi Salib Monastery in West Jerusalem.

– On 13/2/2012, the Israeli Supreme Court issued a decision to prevent calling for pray through the loudspeakers of Salman Al-Farisi mosque in Burin village, in Nablus Governorate. Note that the occupation authorities issued a decision against the mosque to demolish it.

– On 20/2/2012, a group of settlers wrote offensive expressions against Christianity and Jesus Christ peace be upon him and his mother, the Virgin Mary, on the walls of Alevicistih Church in West Jerusalem.