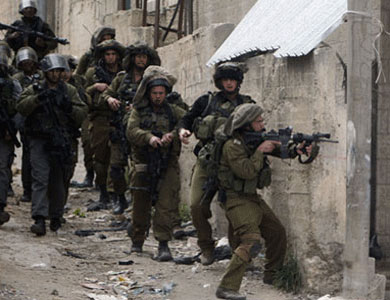 Ramallah – Two citizens were injured and dozens suffered from suffocation due to inhaling tear gas when the occupation forces suppressed Bil’in weekly march against settlement and the apartheid wall. The Israeli soldiers shot rubber-coated metal bullets, stun grenades and gas towards the participants upon their arrival in the liberated territories near the site of the construction of the apartheid wall on the lands of the village. That resulted in the injury of the two youths Mohammed Bernat (25 years), and Ahmed Bernat (20 years) by rubber coated metal bullets.

Ramallah – The Israeli forces suppressed An-Nabi Saleh weekly march against the occupation and settlement, which was launched in solidarity with the prisoners on hunger strike. The Israeli soldiers fired rubber-coated metal bullets, stun grenades and gas towards the participants, wounding dozens, including women and children, with suffocation due to inhaling tear gas. The Israeli occupation forces have imposed a tight security cordon on the village, and deployed soldiers in the surroundings of the village and declared it as a ‘closed military zone’ until further notice.

Ramallah – The occupation forces detained the citizen Raed Khalil A’mira (41 years) for a few hours after being shot with a metal bullet in his leg. Then, they beat him severely, focusing on the head, before they release him later after the intervention of the Palestinian liaison. They also hit a paramedic and injured him with bruises on his face during the suppression of the march of Ni’lin weekly march against settlement and the wall.

Bethlehem – Dozens of people were injured severely with suffocation in Tekoa town, and dozens of trees were burnt by the occupation forces when they launched tear gas canisters at youths during clashes that broke out in the town.

Hebron – The youth Moataz Abu Shama’h was injured by live ammunition and rubber coated metal bullets wounded five others. Dozens also suffered from suffocation and fainting as clashes with the occupation forces broke out at the entrance to Al-A’rroub camp.

Hebron – Two young men from Beit Ummar town were injured with rubber coated metal bullets, and dozens suffered from suffocation when the occupation forces suppressed a march in solidarity with the prisoners in the town. They used rubber coated metal bullets, tear gas and stun grenades, which led to the injury of this number of people. The Israeli soldiers came up to the roof of the house of Ahmed Younis Abu A’yyash to control the movements of citizens in the town, and they detained citizens and their vehicles in the area of A’seida.