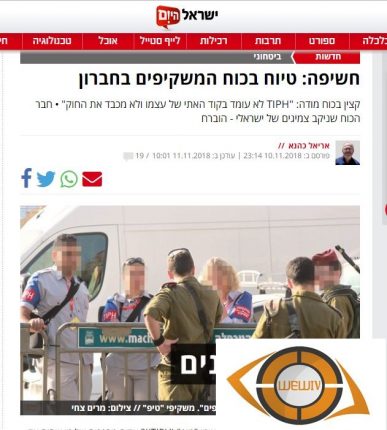 An Israeli newspaper incites against Temporary International Presence in Hebron

Israel Hoyom, a right-wing newspaper in Israel, published a report on its front page entitled “The International Force in Hebron: Monitoring and Lying”, the report accuses the Temporary International Presence in Hebron of lying, deceiving and covering up the “actions” of its members.

According to the report, the international force is composed of 80 members and has been stationed in Hebron since 1994 after the massacre of Baruch Goldstein at Al-Ibrahimi Mosque, which killed dozens of Palestinian worshipers. Observers come from Turkey, Switzerland, Italy, Norway, Denmark and Sweden. This unarmed force conducts regular patrols in the Jewish quarter in the city and reports to Israel, the United Nations and the embassies of the above-mentioned countries through reports on their activities and results.

According to the newspaper, the force practically confronted the soldiers of the Israeli army in Hebron and its members were captured while attacking Israelis.

The newspaper accuses members of the international force of stealing the force’s funds in 2011, and covering the case by the force’s leaders.

In another report on the subject, the newspaper writes that 15 Knesset members went to the Prime Minister, Benjamin Netanyahu last week, and called for an end to the activity of the international force in Hebron.

Members of Knesset from the Land of Israel lobby claim that since the deployment of the international force in Hebron, “22 years had passed, and it has been clear that the observer force is a one-sided force, causing harm to Israeli soldiers and Jewish population, and the Knesset members claim that “the observers regularly harass Jews living in the city and their children, it is time to end the mandate of the observer force, which was supposed to be a temporary mandate.